Meade at Gettysburg, A Study in Command

Check out this interview with Brown on BGES’s YouTube channel: A Conversation with Kent Masterson Brown on his book, Meade at Gettysburg.“

This came close to being my first 5-star review, but It fell short as I will explain in a little bit. Nonetheless, Meade At Gettysburg is clearly one of the best books of the year—period. Now, before I get into my evaluation, I want you to know that I have known Kent for 33 years, and we are friends. Having said that, he knows I would not allow friendship to get in the way of an honest evaluation. He is a Washington and Lee Law School guy, and I am a VMI guy—his son is a rat (freshman) at VMI.

There are very few books that tell you directly what is contained within, but this book does precisely that. This is a book about George Gordon Meade in command of the Army of the Potomac at Gettysburg. It is not a book about Lee’s invasion or John Reynolds or JEB Stuart or Longstreet’s concerns. It is about the commander of the Union Army, the source of his authority, and how he implements it.
There are so many books about Gettysburg—indeed, Kent had previously written two—that you wonder what new could be said about Gettysburg? I was unaware Kent was writing this book, so when planning future looks at the campaign, I fell upon Jeffrey C. Hall’s book The Stand of the US Army at Gettysburg. That exceptional effort did not get the press it deserved, but it did adopt a perspective that I believed fit in the line of answering the question: “Why did the Confederate army fail at Gettysburg?” The answer being, the Union Army had something to do with it! Yet, who actually understood what that meant in practice?
Brown steps into that role flawlessly with a compelling narrative that keeps you turning the pages without falling into the horse latitudes. The narrative starts with the delivery of the order to assume the command of the Army and the painful relief of General Hooker. From that moment, the narrative sits on Meade’s shoulder as he works with Hooker for hours getting the detail needed to continue an operation in progress. Meade then advises his contemporaries—the other corps commanders—that he is now in command. 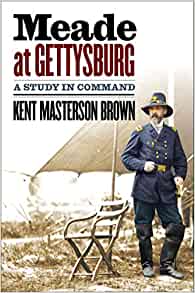 The narrative progresses rapidly as Meade seeks first to secure his forces and establish a strong defensible line that can cover both Baltimore and Washington—two imperatives placed upon Meade as he was directed to evict Lee from Pennsylvania. Clearly, Meade would have preferred to defend a strong position, but what were Lee’s intentions? He needs to find it out, and so he introduces his belief that Meade uses an old European tactic of deploying an Advance Guard.  John Reynolds receives that task.
The conventional interpretation of Gettysburg is that the battle is a meeting engagement precipitated by Confederate Gen. Henry Heth’s deployment of a reconnaissance-in-force to determine what is in Gettysburg. Most historians sign into that interpretation. However, Kent makes a compelling case that Meade, content in the strength of his selected line along Pipe Creek, sent his left under the command of General Reynolds, supported by General Howard, to develop Lee’s intentions by putting a significant force along Lee’s lines of march to see how they would respond. Hence, Buford, Reynolds, and Howard move through and outside town, controlling routes from York, Carlisle, and Chambersburg. This interpretation reconciles well with command decisions that Meade makes by sending Hancock to the battlefield with delegated authority to assume command and make the determination as to where the Army of the Potomac will fight. I believe that is a major revelation that Brown deserves just credit for articulating—it just makes all kinds of sense.

The book evolves with Brown rightly focused on the challenges of logistics that Meade faced—what he needed to fight a major battle and what priorities should be enforced on the rails and roads leading to the Federal field deployment. Brown had expertly defined the problems Lee faced in his retreat from Gettysburg (Brown’s previous title on the campaign) and yet Meade’s challenges are unique to his army and his circumstance and they can be show stoppers.

Brown spins a masterful analysis that is strongly pro-Meade. He stands up to the criticism that Meade received from Washington, and in the century and

a half of analysis that followed the war.  He makes a compelling case for Meade’s exceptional grounding in military theory that he received under Dennis Hart Mahan at West Point, noting that training prepared him for the calm discipline he displayed throughout the war and once he assumed command of the army. This qualification of Meade for the handling of his army during and after Gettysburg produces the only criticism I have of Brown, and it costs him the half star I wanted to give him.

In Brown’s grounding of Meade, he repeatedly analyses actions as being congruent with the writings of Carl von Clausewitz. This Prussian officer is widely regarded today as the most brilliant theorist of war produced in the past 500 years. The only problem is that Clausewitz died about 30 years before the Civil War, and his rambling works were published by his widow in German. The first English translation doesn’t occur until several generations after the Civil War, Indeed, the French, widely regarded as some of the most enlightened theorists, didn’t think enough of Clausewitz to do a French translation until after the 1870 Franco-Prussian War. Brown contends that Mahan was read into European theory and would have shared that with students like Meade less than 10 years after the Prussian officer’s death. My reading is that Clausewitz primarily advances after the German tactics of the first World War are analyzed.

When I spoke with Kent, he maintained that a sharp guy like Meade would have stayed up on such things, and thus would have been influenced in his Civil War command. Kent may be right, but I am not convinced; thus a half point lost. Read his book, and think about it and decide for yourself. I will say that the narrative does not suffer from the connection—you will learn a lot. I just believe it is a comparison that isn’t valid for that particular time in history.

Kent had written a book on Lee’s Retreat from Gettysburg, and you should read that. When reading the post-battle analysis of Meade’s pursuit or lack thereof, Brown makes the case that seems more realistic than theoretical. Over the generations’ armchair historians and commanders have all pointed out what Meade could have done. An army is never more vulnerable when their back is pinned to the water. Conversely, an army is never more dangerous than when pinned with their back to the water. The danger is in the crossing and the security related to that. Brown staying in Meade’s head rank orders the concerns that this new commander would have. His mission was to hurt Lee and turn him away from Baltimore and Washington, and yet he also must deal with the possibility that Lee’s withdrawal is a ruse. Until Lee is clearly through Monterrey Pass and approaching Williamsport, Meade cannot risk losing his commanding defensive positions, thus uncovering one or both cities in the event Lee turns back toward them.

Kent Brown has written a masterpiece that will stand against other works that may address the same subject. By staying in Meade’s head, he has sorted decisively one-half of the battle of Gettysburg. It is definitive with room for healthy debate with existing and future scholars. You can disagree with him, but come armed with your A-game, because he knows his stuff, and his documentation is strong.