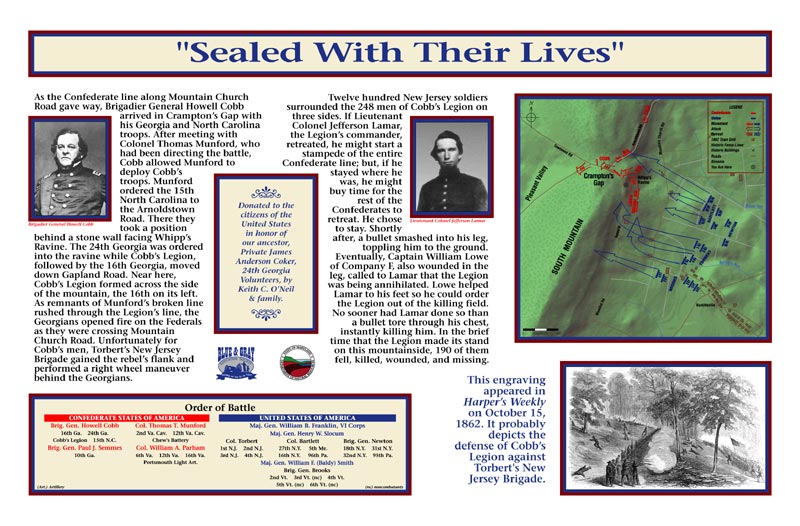 On September 11, 2002, in front of Congressman Roscoe Bartlett and his wife and approximately 150 spectators, BGES dedicated 17 signs at this key Maryland site, where forces under Confederate General D.H. Hill fought a desperate rear guard action on September 14, 1862 while forces under Thomas J. “Stonewall” Jackson completed the encirclement and capture of Harpers Ferry. The partnership with South Mountain State Park required BGES to raise more than $50,000 for the development of the signs.

The project suffered from adverse publicity generated by the popular cult film, The Blair Witch Project, which caused members of the town of Burkittsville to reject historically accurate sign placement to keep unwanted tourists out of the private and small community. Many of the 13 signs in and around Crampton’s Gap are placed in and around the Correspondent’s Memorial at Gathland. The project also includes identical campaign signs at Fox’s Gap and Turner’s Gap.

A commemorative brochure has each sign and historical context of the site that was secured by Confederates who “Sealed it with their Lives.” The original signs are still in place more than 16 years after dedication.

Future interpretative efforts there will emphasize proper placement of signage prior to the execution of a memorandum of understanding. Still, the Michael Beard–designed signs are impressive in quality and durability, earning kudos from all who see and read them

Fourteen of the signs are shown here. To see a larger version of any one, click on the thumbnail image.