Old habits die hard. But that’s not always a bad thing. For nearly 40 years, Dr. Stephen Wise has walked into the same office day after day after day. And not once has he tired of it. An author, speaker, and devoted student of American history, Wise is also the director of the museum for the Marine Corps Recruit Depot at Parris Island. It’s a dream job perfectly suited for someone whose thirst for knowledge is never satisfied.

“Working at a museum forces you to focus on how to narrate and explain,” Wise says. “You have to make people understand what you’re talking about. You never stop learning.”

That’s been a running theme throughout Wise’s career. Born in Ohio in 1952, he grew up in Toledo with parents who were history buffs. They loved to travel and often chose national parks as the destination for family vacations. To this day, Wise has memories of his first trip to Bull Run, when he was just six years old. Several years later, his mother took him and his best friend to Gettysburg.

“We stayed for three days,” Wise recalls. “I remember Devil’s Den, and wanting to buy relics from the gift store.”

By now, Wise had immersed himself in American history, particularly the Civil War. He and his friends collected Mattel toy soldiers and re-created famous battles. “The Centennial was very exciting,” he says. “We were involved in all sorts of Civil War activities.”

Wise’s love of history eventually led him to Wittenberg University. There he majored in history, with a concentration on Russia. But the Civil War remained his passion. “I was always fascinated by Charleston,” he says. “I wrote my senior paper on the 54th Massachusetts Infantry and the Battle of Battery Wagner.”

The next stop for Wise was Bowling Green University, where he continued his study of American history. He had the good fortune to connect with Robert Twyman, one of several noted historians who helped guide his career. Wise got his Master’s at Bowling Green, and had his eye on a doctorate as well, but Twyman offered some surprising advice. Specifically, he told him to apply to the University of South Carolina and study under Thomas L. Connelly. 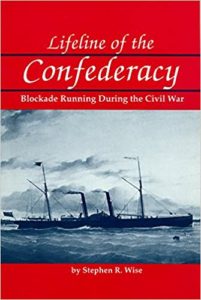 All these years later, Wise is glad he was smart enough to follow Twyman’s counsel. He arrived at USC in 1978 and got his doctorate as planned. Wise found working with Connelly to be a revelation. “His style was perfect for me,” he says. “He cut you loose and let you do your own thing. He always tried to steer you to a topic that could become a book.”

That’s how Wise wound up writing his first book, Lifeline of the Confederacy: Blockade Running During the Civil War. Published in 1991, the highly acclaimed narrative provides a compelling account of the Confederate effort to deliver supplies through the northern blockade. Wise followed it with Gate of Hell: The Campaign for Charleston Harbor 1863, which received the South Carolina Historical Society award as the best book written in 1994 on South Carolina History. His most recent work is The History of Beaufort County, South Carolina: Volume 2: Rebellion, Reconstruction, and Redemption, 1861-1893, written with Dr. Lawrence Rowland. Wise handled the Civil War chapters, the bulk of the book, which covers the wide variety of military actions that occurred in and around Port Royal Sound. He also was able to chronicle the beginning of wartime reconstruction.

Wise is a staunch supporter of BGES as well, sitting on the faculty and conducting tours. “I really enjoy the people I’ve met through BGES,” he says. “There is great camaraderie. I like learning from others who are more knowledgeable than I am.”

Sure, Wise may be a creature of habit. But as far as habits go, learning isn’t a bad one. Don’t expect him to quit it anytime soon.