A Refugee at Hanover Tavern: The Civil War Diary of Margaret Wight 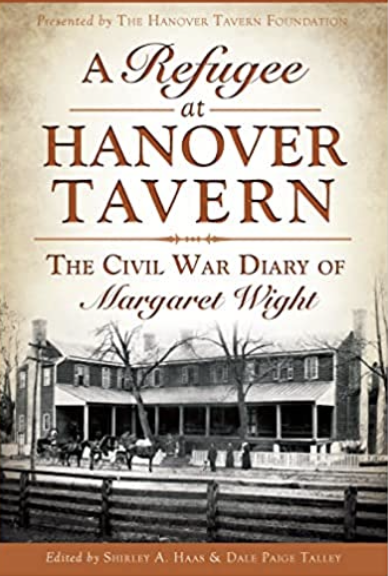 During our May Overland Campaign tour with Gordon Rhea, I happened across this book in the Hanover Tavern bookstore. I quickly picked it up, and it crossed my eyes at a fortuitous time between readings—seemed short enough at 224 pages, so I pitched in. With a foreword and introduction by NPS historian Bobby Krick and Hanover Tavern CEO, David Deal, I had high hopes for the volume. Sadly, it fell somewhat below my expectations—primarily due to the manner in which the editors elected to present it.

This is really three publications in 10 chapters. There is a genealogy of the Wight family (28 pages). Then there is a lengthy, eight-chapter framework that interprets the period of the diary, which started on January 1, 1863, and runs through the postwar period (91 pages). Finally, the diary, written in three volumes, is presented over 71 pages. Notes, a selected bibliography, and an index take the final 20 pages. Overall, the form is neat and the cover is attractive enough to allow me to make a snap judgment based on the cover. Once again, the old adage you cannot tell a book by its cover was proven.

I do not know the editors, and while I found the work competent, it was also a cross between what I call a page-turner and a velcro book. It took me much longer to read than I expected. I normally read 20 pages an hour for comprehension and 25 to 30 for pleasure. This one did not flow well, and it took me the better part of my flight home from Europe to get from page 116 to the end at 204. I came in at about 13 pages an hour. Why is this important?

Well, the genealogy in and of itself was interesting, but outside the realm of the period. I wasn’t prepared for it, not overly interested in it, and subsequently held back from getting to the meat of the publication. This section should have been an appendix, not the opening act. Better editing would have streamlined this process to get to the book title, which was “The Civil War Diary of Margaret Wight.”

The next organizational and editorial decision was the analysis. Here the editors opened an eight-chapter narrative that took up 50 percent of the printed text. As they wove a story of the Civil War and the events surrounding it, and the Wight family’s role in it, we followed Mr. and Mrs. Wight, their children—two sons who served the Confederacy and two daughters, one of whom died in Culpeper while nursing soldiers, and the other who was coming into young womanhood and was a candidate to go to college in Farmville. This section integrated elements of Margaret’s diary into the narrative, but in taking it out of context, we saw the war through the editor’s eyes and not the author’s.

A more conventional interpretation would have been to print the diary and make interpretative clarifications with the different dates where she wrote entries. This proven approach makes the diary the star and offers researched and considered explanations and context that help the modern reader.

Finally, we got to the raw diary. During my flight, I invested the first 90 minutes covering the 20 pages from section two and the transition to the diary. Absent any context, I still found the words directly from Margaret’s pen compelling, an entirely different context from the interpretation that preceded it. I mentally adjusted after 10 or so pages, and then started the diary over again, finding it remarkable especially in the manner in which she revealed nearly contemporaneous news—almost like she had a ticker tape in her room. The news of Stonewall Jackson’s death within a day of it actually happening (no doubt revealed as a train ran from Guiney Station to Richmond through Hanover Junction). They were so clear and timely that I wondered if indeed she was honest in recording her dates and perhaps listing a date of the event several days later as perhaps a chronology—certainly an item for discussion.

Another aspect of the diary was the actual experience of the refugee. That they boarded at Hanover Tavern is no doubt, but their lives move to individual homes, into Richmond, down to Charles City Courthouse, Hanover Junction, and elsewhere. We read about the reception they received and how they made ends meet in the presence of crushing inflation and deflating of the Confederate currency. We view how she and her husband make and sell envelopes to supplement their income—often hundreds and thousands of them. The children pop in an out on military assignment—one is captured and a prisoner at Camp Chase in Ohio. Frankly, the interpretative essay was unnecessary to the enjoyment of this fifty-something matron.

The book is a valuable addition to the literature of the period. It is social history at its best, written by a literate and informed woman. With a child at VMI (my Alma Mater), life in Norfolk, frequent references to places like Beaverdam Station and Hanover Station, and a family burial at Tuckahoe Plantation—all places you can visit today—this is a fine narrative. Two stars is a fair rating for the overall publication, but the diary would be a solid four-star narrative. I would buy it again.