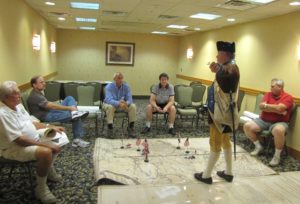 One of the great memories brought to mind from the Hudson River trip was the experience of acting out a role in the defense. We tried to place ourselves in the situation as understood by those who actually were there, not bringing historical judgment nor modern interpretations to what was possible. It was a great learning experience and one I have used throughout the lectures I have given in adult learning. I ask my audience to separate themselves from “today” and place themselves back in time. This new perspective brings a different understanding to those historical situations and makes today’s event clearer.

The Bennington trip was special because the site chosen is not a common one. Following Burgoyne’s path and the need to find mounts for his cavalry led to an important but often under appreciated event. Walking the terrain created an experience no amount of reading or map interpretation could recreate. Walking the very paths our forebears did, placing themselves in harm’s way when confronting a military power which by all accounts was better trained and equipped, to be led by a person with limited military experience, with enough intelligence and charisma to have those men follow him, is a lesson each of us values.

The introduction to the trip depicted in the photo was a way to make the transition from our modern “place” to that place in time we intended to visit. To some the costume may have seemed somewhat quaint, but to those willing to put aside our modern selves and get into the spirit, the costume opened that door, gave us permission to role play, to take seriously our engagement, and hence derive more from the experience than simply having been “on tour.” As someone who has played simulation games, most of them on military events, this particular tour brought “life,” not because we saw people dressed and acting from that time, but that we were given the chance to “be there” as well, if not in dress, then in spirit.

From my perspective, what Len and BGES have done is made more immediate by those historical moments which truly defined and created who we are today.