This month’s BGES Member Making a Difference features Brian Mattingly, who is also a member of the Shenandoah Valley Battlefields Foundation (SVBF). Brian has commissioned artist Keith Rocco to depict a lesser-known aspect of the Battle of New Market, which features the VMI cadets manning two artillery pieces. A limited-edition canvas of the painting will be issued in 2022 to generate funds for preservation efforts at the New Market Battlefield. Here are his thoughts in his own words. 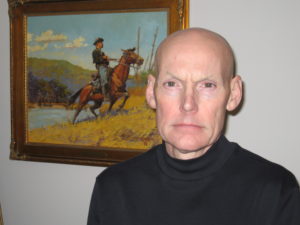 I have been a member of BGES since the early 2000s thanks to a lifelong interest in American history, focusing specially on the Civil War. Initially, I was attracted to BGES because it offered a more detailed approach to understanding our nation’s history through guided tours in small groups. I have enjoyed the camaraderie during the tours, and Len has always taken the time to get to know each attendee. One experience I will never forget is the 1864 Overland Campaign tour conducted by Ed Bearss, Greg Mertz, and Len.

I was born in Leonardtown, Maryland, and grew up on a farm on the outskirts of town. I currently live in the town itself. My interest in American history was instilled in me at an early age. I recall family trips to Gettysburg, Fort McHenry, and Washington, D.C., along with stories on my great aunt’s back porch told by someone who had an ancestor who attended the Virginia Military Institute (VMI) when Thomas J. “Stonewall” Jackson was a professor there. One of the first Civil War books I remember looking at was The American Heritage Picture History of The Civil War by Bruce Catton. One aspect of the book that I enjoyed at such a young age were the numerous bird’s-eye view picture-maps of certain battles.

The project I have been working on, in conjunction with the Shenandoah Valley Battlefield Foundation (SVBF) and artist Keith Rocco, is intended to shed some light on a lesser-known aspect of the Battle of New Market. The impetus for the painting occurred in the fall of 2019, when my father and I took a tour of the VMI campus and the New Market Battlefield State Historical Park. Col. Keith Gibson, the Director of the VMI Museum system, gave us a tour of the campus and a behind-the-scenes look at the campus museum.

The history and traditions of VMI resonated with me and inspired me to learn more about the cadets and their role at the Battle of New Market. I read Sarah Kay Bierle’s Call Out the Cadets, David Powell’s Union Command Failure in the Shenandoah, and Charles Knight’s Valley Thunder. One fact that kept coming back to me after reading each book was that there were other cadets, under the command of Cadet Collier H. Minge, manning two artillery pieces on the east side of the Valley Pike. These cadets were part of the line that repulsed Maj. Gen. Julius Stahel’s cavalry charge. Many artists have depicted the cadets at the Bushong Farm and their charge across the Field of Lost Shoes, but no one has attempted a painting of the other cadets manning the two artillery pieces. It was like they had been forgotten with the passing of time.

In 2019, SVBF established the New Market Battlefield Greenway Project. This project is committed to preserving hundreds of acres of the core battlefield, including creating signage, walking/driving tours, a multi-use battlefield trail for walking and biking, historic fencing, and cannon to the battlefield’s east side. As part of this project, SVBF acquired the Buhl property, where Stahel’s cavalry charge occurred.

I was a big fan of the contemporary historical artists that became well known in the late 1980s and early 1990s through their depictions of the Civil War. I have to say, though, my favorite artist was Keith Rocco, who had an impeccable talent for conveying the trials and tribulations of the common soldier. I not only became an active collector of his work, but also became good friends with him. When SVBF acquired the Buhl property, I felt this was an opportunity to recognize these lesser-known cadets through a painting by Keith, which in turn could assist SVBF in their fundraising efforts for the New Market Battlefield by issuing a limited edition canvas of the painting.

I first presented my idea to Keven Walker, the CEO of SVBF. Keven is an admirer of Keith’s work and was quick to agree. I then approached Keith about my idea, and he was very excited about the painting. Over the coming months, SVBF, Keith, and I held numerous Zoom meetings to discuss the scope of the painting, conduct research, and establish a timeline. Very little is written about the cavalry charge. Therefore, in addition to the research that Keith and SVBF were conducting, I conducted some independent research that might provide additional details for the painting.

The painting was completed in the fall of 2021* and will be on permanent display at the Strayer House in New Market. A limited-edition canvas of the painting will be available to the public in 2022. Historical art tells a story, and this painting does that. I hope the painting will spark an interest in the battle or inspire people who are familiar with the battle to take another look, whether it be through additional reading or visiting the battlefield. This was my first time taking part in a fundraising project for historic preservation, and I view it as a very positive learning experience. I not only learned more about the cadets and the battle through the help of many others, but I also came away with a deeper appreciation for the time and effort it takes to start and complete a historical painting.

*We cannot publish an image of the painting since it is still embargoed. Stay tuned!