River of Death, The Chickamauga Campaign 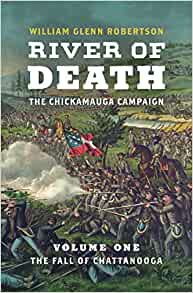 Nearly 30 years ago I met Glenn Robertson on a tour with the new American Blue and Gray Association of Shiloh. He was accompanied by one of his active duty tour assistants, Lt. Col. Ed Shannahan. Glenn was aloof and not terribly interested in the group, at one point telling the tour manager that he was going to go home. Well, he didn’t, but subsequent encounters were always bad and I never formed a favorable impression of him. I had only read his Backdoor to Richmond book about the Bermuda Hundred Campaign, and it was only so-so. Nonetheless, he was a highly regarded historian and director of the Army Combat Studies Institute at Fort Leavenworth.

I had long heard of Robertson’s primary role in establishing the Army Staff Ride Program, and he had mentored many U.S. Army Officers early in their career. Robertson is a legend in the Civil War community. Central to his reputation was the staff ride that he developed at Chickamauga—he could do much but nothing better than Chickamauga. It was axiomatic that he would write the definitive work of that campaign, and for years we waited anxiously. It was worth the wait.

I said what I said to qualify myself as a far-from-fawning acolyte. Indeed, I was perhaps the ultimate skeptic. I had the book for more than two years before picking it up—my bad.

Robertson writes with the eye of an accomplished historian. No detail is too small to develop, and yet the narrative flows effortlessly. That is no accident, nor is he another Bruce Catton. Robertson is well-organized and his flow is predictable. You know precisely what element of his presentation is going to be on the next page. For example, he devotes two chapters, some 72 pages, to the two armies: The Army of the Cumberland and the Army of Tennessee. Each army is broken down into its organizational structures leader by leader and unit by unit. He then proceeds to do expanded treatments in separate chapters about Generals Bragg and Rosecrans—another 52 pages. In each, you learn how the officers achieved their current positions and how they interact with their staff and subordinates. Why is this important? Understanding the material organization and the personalities of the people in the army makes his transition to the operations easier to understand because you know who all the actors are.

Rosecrans is a strange animal, and Bragg is developing a cabal against his leadership. As Robertson transitions into the Rosecrans plans for Tullahoma and reveals his intention to maneuver Bragg out of Tennessee, the reader is introduced to a very precise study of the factors that affect a major military operation—the challenges of terrain, the elements, logistics, and the demands of a commander whose very nature is to second guess and look over the shoulders of his subordinates. We see the influence of officers with political ambitions like James Garfield—a future American president. Indeed, nothing escapes Robertson’s systematic examination. Such work rapidly establishes a rapport with the reader and leads to an increasing level of trust in the reliability of the work. Mind you, I will never be Dr. Robertson’s friend, but I can and do appreciate his qualifications as a historian.

So what is there to criticize, and why not five stars? I rarely grant five stars—something can always be improved. Dr. Robertson’s Achilles heel is too much detail and a painful slowing of the narrative—almost as maddening as Rosecrans’s failure to advance as rapidly as Washington wanted. Over 150 pages later we have met countless rattlesnakes along the Cumberland plateau and moved back and forth, setting and positioning the Federal forces for a supported crossing of the Tennessee River.  Please don’t misunderstand—this is not a criticism, but sometimes you can document too much information, and while creating an unarguably solid narrative that is inclusive, the interest in the subjects begins to wain, especially when you realize and know how much further in the distance is the actual clash of arms. You put the book aside and look at its wonderful 471-page narrative, more than 112 pages of endnotes, an 18-page order of battle, and 41-page bibliography and realize all this, and we are still 10 days short of the engagement at Chickamauga. One hopes that, at 76 years of age, Robertson’s clear-headedness will last long enough to finish another such titanic volume. Being selfish and having seen this first work, I want Chickamauga and I want him to continue and complete the Chattanooga Campaign until Bragg and Rosecrans are both gone—it only seems fair.

I read a lot of books every year, and I have developed a mental shorthand that quickly evaluates a book. I am most appreciative of a historian who can write, and Robertson can! His book is a page-turner, and it will read easily for any Civil War or history buff. The level of detail may cause less disciplined readers to drift and perhaps not finish it—that would be your loss. The documentation is impeccable, thus making it the definitive work for many years to come. What I lament is the inescapable consequence of such a work. Having started the journey, I am impatient to access the next volume, knowing that a similar experience is likely. I do not know when the next volume will be released, but I look forward to it.