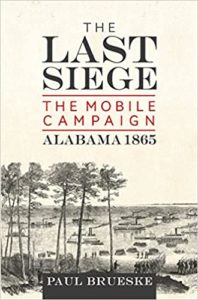 Twenty-three years ago, BGES obtained a ABPP Grant to conduct a Preservation Conference for the Mobile Campaign. Having spent some time to organize, conduct, and write a report, I was fairly familiar with the key sites related to the campaign and stayed involved to help the Alabama Gulf Coast Convention and Visitors Bureau (Herb Malone) and the Mobile Museum (Dr. George Ewert) implement a number of the recommendations. Soon thereafter, we conducted some superb tours that included a boat running past Fort Morgan and a harbor tour over toward key sites in the lower bay. The last acts so to speak at Spanish Fort and Fort Blakeley were anticlimatic, as the resources available and their management were not good. On a recent trip, I ran into Blanton Blankenship who was the curator of the Fort Morgan site, and we reminisced over the past years and the progress made. Indeed, at the time he was walking a contractor around to discuss implementing one of the recommendations we had made. All in all a satisfactory experience.
Even more exciting was to discover a rebirth at both Spanish Fort, which had been considered completely lost, and Fort Blakeley, which now was under new leadership that understood the significance of the site, had improved the interpretation dramatically.  I highly commend that what used to be a one-day visit to Forts Morgan and Gaines to cover the events of August 1864 has fully bloomed into a three-day trip of which Blakeley and Fort McDermott at Spanish Fort earn a worthwhile day on their own.
Scholarship on the two operations—the 1864 Naval battle and the 1865 land operations resulting in the surrender of Mobile and the end of the war—was deeply disappointing. Few works had been done, and the best of the lot was a book by one of the Federal officers who participated in the campaign. C. C. Andrews’ book has been in print for more than a hundred years. The naval battle found a notable Homer when local historian Jack Friend penned a wonderful book, West Wind, Flood Tide, in 2004. Still in print, it is well worthy of its five-star rating, though limited to the August engagement.

Chester Hearn has written a number of functional books related to personalities and the campaign, but none quite rose to Friend’s standard. As to the City of Mobile during the Civil War, Art Bergeron’s Confederate Mobile stands alone; sadly it too is a little thin in detail. So it was with high anticipation that I picked up both Brueske’s book and Russell Blount’s Besieged, Mobile 1865 on a BGES tour in the winter of 2019.  Having read the former, subject of this review, but not the latter, I am still looking for the definitive work on the Spanish Fort and Fort Blakeley operations.

Brueske has written a very useful and interesting book. However, it is not an analysis and, indeed, not even a reliable narrative of primary sources. I want to emphasize my topic sentence: “Very Useful and Interesting.” You would be hard pressed to find a more comprehensive compendium of direct quotes and first-hand accounts and or reminiscences.  Indeed, the complete narrative text is 193 pages with just under 1,200 end notes and a 15-page bibliography. In fact, this is one of the most researched books I have ever picked up and read. Therein lies the problem.

In fairness to Mr. Brueske, whom I have never met, he does state that his purpose in writing the book was to “shed further light on the brave men who fought for their respective causes and to examine the events that occurred in this seemingly forgotten but important campaign.” He gets a resounding 5—even a 6 on a five-star scale—for his shedding light; but a very weak 2 for his techniques that make the book a marginally constructive almanac of recollections and remembrances. If he were in front of me now, I would say directly: “You know this stuff, but you let me down. I want to know what you think and I want to know that you have evaluated this data and that you have discarded exaggerations and verified and contextualized heretofore unknown or unpublished ‘ahhhh-hahhh!  moments.'” This book could have easily been written with Brueske being the primary player teaching all he has learned and selectively using end notes as they are intended to bolster the contemporary historian’s assessment. Conversely, if this was to be an edited compendium of really neat quotes, then the burden of an editor is to make sure that when people exclaim “it was the hottest fire they had ever been in,” it is placed in context. I learned over the years the most significant battle was the one in which the protagonist was wounded or a friend was killed—that could be on a skirmish line in Pascagoula or on Snodgrass Hill at Chickamauga. The editor helps the reader keep that in mind.

This book feels more like an edited assemblage of related statements. While woven together in a compelling narrative that does flow, the style of the book often loops back to narration that has already passed a paragraph or two ago. It happens because he is citing two or more people describing the same event; sometimes his very limited editorial commentary introduces a point that his block quote is going to say in the same or very similar terms. An editor at Casemate Press should have pointed that out. In that he was not well served by his publisher and editor.

Brueske is making a difference in the preservation and understanding of this campaign. He administers and aggressively attends to a Facebook page “The History of the Mobile Campaign.” He also conducts online lectures, Civil War Round Table talks, and tours of the Campaign—for example he is doing a walking tour of Civil War Mobile at 3 PM on Sunday September 6.  If I were close by I would certainly go. I hope one day to involve Paul with the BGES as I have great respect for his efforts. This book, though, stacks up over all at 2 stars out of 5. Would I buy it? Well, I did, but if you are interested in the Mobile Campaign and love people stories then absolutely yes. Otherwise, look for a better book. It’s gonna happen.