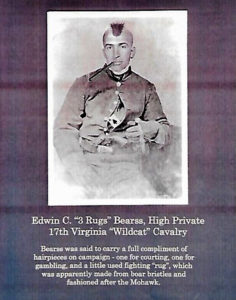 One of my favorite BGES memories was from the 2005 BGES “Road to Appomattox” tour with Ed Bearss and Chris Calkins. The tour started with the Union breakthrough at Petersburg and followed Lee’s retreat to Appomattox. There were many wonderful moments, such as when we stopped by Olger’s General Merchandise store at Sutherland Station, made famous in Tony Horowitz’s Confederates in the Attic. Jimmy Olger had the oddest collection of stuff I have ever seen, but what topped it off was that Chris got Jimmy to do an authentic “Rebel Yell.”

But perhaps the most fun moment of the trip was when we got to the visitors center at Appomattox. Along one of the walls were photos of various Civil War soldiers present at Appomattox. The park ranger told Ed there was one in particular he wanted Ed to see. As we wandered over, Ed suddenly broke into a great booming laugh. There on the wall was a photo of a private in the 17th Virginia “Wildcat” cavalry named “Edwin C. ‘3 Rugs’ Bearrs,” sporting a Mohawk haircut. Underneath the photo, the inscription read, “Bearss was said to carry a full complement of hairpieces on campaign—one for courting, one for gambling, and a little used fighting ‘rug’, which was apparently made from boar bristles and fashioned after the Mohawk.” The park rangers were tipped off that Ed was arriving that day and superimposed a doctored photo of Ed on top of the picture of one of the soldiers and added the humorous caption.

That was a priceless moment.