With Gary Ecelbarger and Scott Patchan 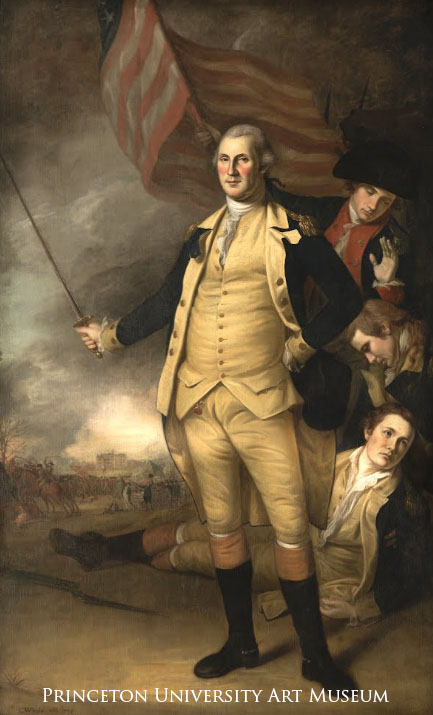 Except for the Declaration of Independence’s signing, 1776 had not been a good year for George Washington. The general had been steadily denied and pushed away from the places he chose to defend. The British had left Boston but returned in force to New York, where battles on Long Island and Manhattan had truly routed the Continentals and shaken Washington’s faith in his subordinates like Nathanael Greene and Charles Lee. The loss of New York and the subsequent retreat across New Jersey to a temporary haven along the Delaware River in Pennsylvania were accompanied by more bad news. The recruits that composed the bulk of Washington’s main army were looking forward to the expiration of their enlistments and returning home to disappear in the woods and perhaps avoid accountability for a war that increasingly looked like it would be lost.

This program is about George Washington’s greatest risk and his high point in a year that was mostly depressing. History tells us it was a success, but at the time the risk was more significant than we fully appreciate today. Immerse yourself in that critical period in America’s birth process, as Washington scholar Gary Ecelbarger & Trenton/Princeton battle historian Scott Patchan weave the rest of the story for you.

6:00 PM. Meet at the meeting room in the Doubletree Hotel for nametags and maps and to take in Scott’s & Gary’s introductory lecture discussing Washington’s horrible summer and fall of 1776 and the very real possibility that William Howe will have successfully conquered America. He will finish by discussing Howe’s plan to capture Philadelphia.

Dinner is on your own.

8:00 AM: Load up for departure and four very full days. Our first day is dedicated to the prelude to “The Crossing.” We will start in New Brunswick at the Raritan River and talk about Washington’s three-day encampment there at the end of November 1776. Here Gary will reveal to you Washington’s unknown plan to personally reinforce the divisions of Generals Greene and Lord Stirling with an overnight march from Trenton. Leaving the Raritan camp, we will head to Trenton and stop at a Seven Years’ (French and Indian) War structure, the Old Barracks, and discuss its use as a shelter for American troops early in December as well as for the families of the Hessians beginning on December 8. A tour of this historic facility will follow this discussion.

After lunch, our focus is the two weeks preceding “The Crossing” from the Pennsylvania side of the river. We begin with an unmarked but significant site: Colvin’s Ferry. It was significant in this campaign and at other times. From there, we head up the old ferry road to George Washington’s Bucks County, Pennsylvania, headquarters. It is the only known house owned by two signers of the Declaration of Independence. We then finish the afternoon visiting several sites important in plans for “The Crossing,” including the house where the plan to attack the Hessians was hashed out, plus both General Greene’s and Lord Stirling’s headquarters.

Lunch is included, but dinner is on your own.

8:00 AM: Our day begins with a protracted visit to Washington Crossing Historic Park, at the dramatic and iconic site where George Washington and 2,400 Continental soldiers conducted the famous crossing of the ice-choked Delaware River on Christmas Night, 1776.

We then conduct a dry, motorized crossing of the Delaware to visit the the New Jersey bridgehead. The rest of the morning will be dedicated to the Americans’ early morning march to Trenton, the division of Sullivan’s and Greene’s forces, and the American artillery deployment overlooking the town of Trenton.

After lunch we will cover the key elements of the Battle of Trenton, the rousing American victory that sparked a tremendous reversal of American fortunes at the close of 1776. But the year has not yet ended. Our next stop is where Scott & Gary uniquely place Trenton as its own entity rather than a “Ten Crucial Days” contest as Washington plans for the British reaction to his surprise rout of the Hessians. Having stirred the hornet’s nest, Washington now had to deal with the dual threat of a practically certain British response as well as the expiration of the enlistments for much of his army.

We will end the day by heading to Crosswicks, New Jersey, to discuss the actions of Brig. Gen. John Cadwalader and his 2,100 Pennsylvanians from December 29 to January 2. We follow their pre-dawn march to Trenton, and we will end with Washington’s impassioned plea to hold his diminishing force intact for a bit longer.

Lunch is provided, but dinner is on your own.

8:00 AM: We are off early and will spend this entire day on two battles that were fought on consecutive days: January 2 and 3, 1777. This morning we will follow Lord Charles Cornwallis and his portion of the Crown Forces advancing from Princeton to Trenton. They were harassed and delayed by well-placed American detachments at every creek crossing on the route to Trenton.

The rest of the morning will be spent developing and dissecting the Battle of Assunpink Creek (2nd Trenton) on January 2, a very bloody defeat for Cornwallis. We will then stand in front of the Alexander Douglas House, where Washington held a post-battle Council of War and hatched a plan to march upon Cornwallis’s rear. After lunch, we will follow Washington’s route and cover the Battle of Princeton. This blow-by-blow account will incorporate new findings and will include a unique opportunity to follow the trace of the original road used by the Americans to enter the battle.

Lunch is included, but dinner is on your own.

8:00 AM: After the successes at Princeton, we head to Morristown to study Washington’s winter encampment, which he held from January 6 through May 29, 1777. We will show that his force was very active throughout the winter and spring months of 1777 in what is known as the “Forage War.” A total of 58 engagements were fought within 84 days. Here spirited and efficient fighting, primarily by New Jersey militia, continuously frustrated Howe and prevented him from moving overland toward Philadelphia. The tour ends about 1:30 PM as Gary talks about Howe’s decision to use a water route to take Philadelphia in 1777.

Read this Tour Talk about “Washington’s Desperate Gambit,” published on the BGES Blog.

Gary Ecelbarger is an award-winning author of nine books relating to 19th-century personalities and events, as well as more than three dozen monographs, essays, and articles on Revolutionary War and Civil War-era topics. As a historian, symposium speaker, and tour guide for the past 25 years, he has led his audiences through complex campaigns and prides himself on crafting well-researched, thought-provoking programs that maintain an intriguing, chronological flow and feature off-the-beaten-path historical sites. He is currently writing a single year, military campaign biography of George Washington for Westholme Publishing.

Scott Patchan is a first-rate presenter of history programs in both the Revolutionary War and Civil War eras. Scott is a graduate of James Madison University, and he has authored many articles and books including, The Forgotten Fury, The Battle of Piedmont; Shenandoah Summer: The 1864 Valley Campaign; Second Manassas: Longstreet’s Attack and the Battle for Chinn Ridge; and Worthy of Higher Rank, The 1864 Shenandoah Valley Campaign Journal of Colonel Joseph Thoburn. His next book, George Washington in the French and Indian War, will be published by History Press in 2023. He is currently researching for a book he intends to write on the Battle of Assunpink Creek/Princeton.

The servicing airports are Philadelphia [PHL] and Newark Liberty [EWR]. Trenton Airport is also an option but does not have significant flight choices. If you fly, you will surely need to rent a car or arrange a limo.

You will be provided maps upon arrival. The following books are suggested to enhance your readiness for the program. Amazon.com has a program to support non-profits IF YOU SIGN UP to support Blue and Gray Education Society (EIN 54-1720582) at AmazonSmile. When you sign up there rather than the normal Amazon site, one-half of one percent of your purchase price will be provided to BGES as a donation from Amazon. This will apply not only on this purchase but others you may make at other times.