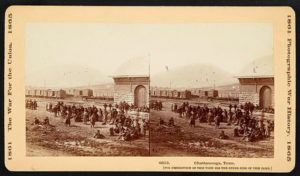 One of the great benefits of working at a specific park for most of one’s career is the ability to craft different aspects to the consensus story. No place in the west is better considered than Chattanooga and the operations in Northern Georgia—great armies meet there—indeed six operated there at one time or the other and because of its central location on railroads and its “front door status” as the entry into Georgia and the pathway to Virginia and conversely the route to both Nashville and Murfreesboro there is no more important railhead. With such lines of communications ripe for the picking, cavalry operations take on increased interest and meaning beyond the battles and this program will focus on how Confederate General Braxton Bragg used his for his purposes in late 1863 and its carryover for General John Bell Hood nearly a year later.

OK this is not a Weekend Warrior tour conducted on the weekend; but, we have a really good reason for it as you can team it with a consecutive program at the same hotel that starts a few hours after this one ends and is led by Jim Ogden—the proverbial twofer. You need not attend both but why not and if you do we will offer you a financial incentive to do so. See the registration form later on.

Meet at 6 PM in at the headquarters hotel (Fairfield Inn, Swallowford Village Drive) where Lee will speak with you about the romance of the cavalry both then and now. His central focus will be on the young beau ideal and western favorite Joe Wheeler—Forrest may have been more effective; but, Wheeler was a command favorite. Wheeler viewed cavalry as a means of disrupting enemy operations through raids on depots and supply lines. This program will examine in detail two of his raids—the first being Wheeler’s raid into Rosecrans’ rear in October 1863 and the second being his late summer raid of 1864 on Sherman’s supply line to loosen his grip on Atlanta.

We will break in time for you to have dinner on your own.

Depart the hotel at 8:15. IN the aftermath of Chickamauga, Confederate cavalry became the main tool Bragg unleashed against the besieged forces of General Will S. Rosecrans in Chattanooga. Bragg dispatched his cavalry into Tennessee and Rosecrans’s rear to cut the Federals tenuous supply lines. Wheeler attacked the mission with relish and they had free reign within the Sequatchie Valley striking at Federal wagon trains before crossing the Cumberland Plateau and riding toward the Nashville & Chattanooga Railroad. Here he faced a bit more resistance as forces under the command of General George Crook challenged his operations. While this raid did a tremendous amount of damage, Wheeler was unable to achieve his ultimate goal of cutting Rosecrans’s lifeline from Nashville.

Before we finish the day we will look at another of Wheeler’s fall 1863 raids within the Sequatchie Valley and other lighting strike at the railroad before culminating the day with Wheeler’s near disaster at Farmington.

Lunch will be included but dinner is on your own.

0815 depart the hotel. Fast forward 11 months and Atlanta is besieged. John Bell Hood has fought several battles in the shadows of the Atlanta church spires and has not dislodged the army group of three independent armies under General William T. Sherman. I need, Hood turned to Joe Wheeler ordering him to strike Sherman’s critical supply lines on the Western and Atlantic Railroad and beyond. This mandate resulted in one of the least well understood and yet most important and longest raids of the war.

Wheeler again approached the challenge with enthusiasm and relish first striking at garrisons, block houses and depots along the railroad in Northern Georgia before moving into East Tennessee where another railroad beckoned towards Knoxville. This expanded raid caused Wheeler to split his forces with some of them actually ending up in southwestern Virginia. We obviously cannot do all that in a day but we will visit the key sites in Calhoun and Dalton before moving into East Tennessee at Cleveland and Athens towards Knoxville before turning back towards central Tennessee. It was an ambitious and aggressive approach to a difficult task; howe did he do? We will let you decide once we are done. Lunch is again included but we will dismiss about 2 hours before Jim Ogden does his opening lecture on his Bragg program.

We are obviously pitching doing both programs and will make it worth your while. But if you can only do this one and are going to spend the night you are welcome to listen in to Jim’s opening lecture at no additional cost—a bonus thanks for coming to this program.

The servicing airport is Chattanooga (CHA). The hotels have generally done away with airport shuttles in the wake of COVID. You can visit the airport website www.chattairport.com/ground-transportation where you can get details for taxis, lyft and Uber. The hotel is 4 miles distant.

To register by mail or fax, download this printable registration form: The Cavalry in the 1863-1864 Georgia Campaigns