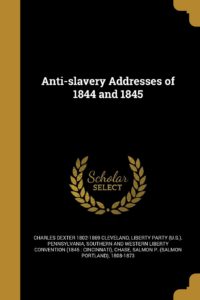 A few weeks ago, I finished a book from my African American shelf intending to roll it into July. But then, having also picked up another book from that shelf—Roll Jordan, Roll, which is a good deal longer and wider-reaching thematically—I opted to review this book this month. At least one of the authors you should recognize: It is the 37-year-old future Treasury Secretary for Abraham Lincoln and Chief Justice of the Supreme Court—16 years before he moves into those more famous spots. The other was another abolitionist, Charles D. Cleveland. Cleveland is the driving force behind the publication, and at the time it was released, he had recently a few scores to settle that showed that he was not just morally right for his activism on behalf of the 1840s Liberty Party, but that he was now proven right by the actions of Congress in the wake of the Civil War. In modern parlance, he is doing a “Victory Lap.”

There are two themes that should be addressed in this review. The first is the context of the publication and the contents in mid-19th-century America, and the second is the significance of publishing this in the late 1960s America. First, what this is? Charles Cleveland is stumping for James G. Birney for president in 1844. As the candidate of the newly established Liberty Party, he is railing against both Henry Clay, The Whig nominee, and James K. Polk, the Democrat. Cleveland’s speech in the midst of the 1844 presidential campaign is a stem-winder. As you transport yourself to the period, you find yourself listening to a long-shot party that is outside the mainstream political body making the case for their one-shot agenda, which is the abolition of slavery. Cleveland’s time in space narrative is instructive in providing both depth and body to what for years has been a few paragraphs at the most in a modern history book. As a man whose commitment is deeply rooted in morality and focused like a laser beam on the corrupting influence and subsequent power of the Ruling Slave Class, he walks you through the history of the anti-slavery movement from its betrayal, under pressure from the Great Slave Power, to the current imperatives and claims the abject corruption of the ideals of the American Republic that can only be redeemed by a turn to the Liberty Party which will not compromise. Of course, history tells us that James K. Polk won the election, but there is a sub-story, and it gets I think to the purpose for which Cleveland publishes his and subsequently Chief Justice Chase’s 1845 post-election speech in Cincinnati.

Cleveland’s day-time job is as the president of the Philadelphia Bible Society, a branch of the national American Bible Society. He had been in the role since November 1839. Shortly after this speech on February 22, 1844, he submits his resignation (on June 3), under pressure, from the post. His talk had widely criticized everyone who had made any compromise with the Slave Power, and that included many men of the cloth. Keep in mind that the women’s rights movement had also become very active in anti-slavery rhetoric, as that vocal minority gave full-throated substance to the incongruence associated with supporting the status quo within the country. The movement gains support, but like so many third-party candidacies even today, they can do no more than deny one of the major parties perhaps a victory—they cannot win it on their own. So, Cleveland publishes this to settle scores now that the Constitution is being amended to create the rights and abolish the slave trade he labored so hard to achieve. With Chase in the nation’s most substantial judicial position, the days of Dred Scott and the Court of Roger B. Taney are well past.

The second talk given by Chase at the Southern and Western Liberty Party’s June 11–12, 1845, convention in Cincinnati is the first volley in the strengthening Liberty Party’s midterm efforts to place Congressmen and other like-minded politicians in key positions. Chase was a powerful attorney in Ohio, and he was affiliated with Harriet Beecher Stowe and other abolitionists. As a strong advocate against fugitive slave laws, Chase represented many individuals being processed for return to slavery. As a founding member of the New Liberty Party, his voice was powerful and, in the wake of this speech, it was printed, bound, and sold in the thousands of copies—a virtual mantra of the political movement.

The 1867 publication of the two speeches comes in the twilight of Chase’s political life. He has been chief justice for several years, Lincoln is dead, and Cleveland has moved to England to try and recruit his health. In leisure, he resurrects his intention to print Chase’s address for posterity. As he reaches out to Chase (in 1865), who has no objections, the chief justice agrees but graciously insists that he will assent only if Cleveland publishes his 1844 address with it. That is done in 1867.

Fast-forward to 1969: The country is aflame. Civil Rights legislation, an unpopular war that has disproportionately drafted black men into the military has produced race riots and war protests that have run Lyndon Johnson out of the White House. Black militancy is juxtaposed with more moderate voices for non-violence like Martin Luther King Jr. Hard southern resistance has produced violence and resurrection of the KKK in the Deep South. Remedial actions focus on the South, even though the stain of racism is still evident North and South. With the assassinations of Civil Rights leaders and white voter registration activists, this documentary release was mute evidence of the long-standing moral battle being fought more than a century later.

The Negro Universities Press specialized in bound reprints of historical books, pamphlets, and periodicals on the African and African American experience. The press was founded in 1968 to publish original works by scholars affiliated with more than 100 colleges and universities with a predominately black enrollment, and to reprint in book form materials on the black experience, including speeches and manuscripts, of interest to historians and educators.

The presence of the Negro University Presses suggests what we know: The business world was as segregated as any other portion of society. The press was a subsidiary of Greenwood Press, a major New York publishing house. Given its start in 1968, we see a body of literature that had no commercial market and was a hard sell to segregated university libraries. Most found their way to historically black colleges. Frankly, I have maybe 30 or more volumes that I acquired for pennies on the dollar at a book show and, until I picked this up and read it, had never read any of them in more than 30 years on my bookshelf—amazing what happens when you pick up a book and open the front cover.

So, what to make of this book review? Well, I declined to assign it a star rating because it is a bound documentary of an event. It is the literary creation of the speaker and does represent their political view and a perspective on America in the decade of the 1840s. If you can open your mind to the controversy surrounding such a position and juxtapose it with the various historical events of the era related to abolitionism you get a “you are there” moment. It is not a historical interpretation, but rather a document that stands on its own. It is not a 5 star or a 1 star—it is an event, or rather two events. I found it enlightening, and thus part of my newfound interest in the actual period and its impact on the events of the times. I would not shy away from seeking out a copy and reading it. Perhaps you can mentally joust with Chase or Cleveland and perhaps even do your own fact-checking. What is fact? What is interpretation, and what is hyperbole? Both talks are very well organized, and you would have no difficulty plunging into them in parts. Good luck.