Tullahoma: The Forgotten Campaign that Changed the Course of the Civil War, June 23–July 4, 1863 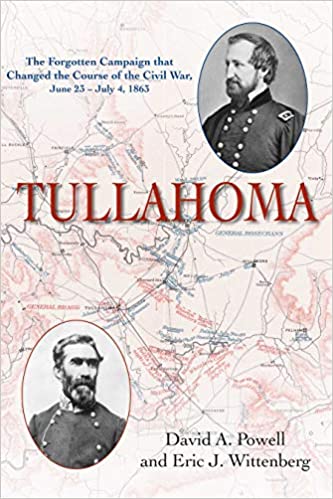 David Powell continues a relentless publication schedule that has established him as the “go-to” guy for all things Middle Tennessee and Northern Georgia—not to mention, his recent contribution to his alma mater’s (Virginia Military Institute) legacy in the Shenandoah Valley. Tullahoma expands his mastery of the 1863 period that constituted the high watermark of Confederate hopes in the West. It sets the stage for the drama of the Chickamauga and Chattanooga campaigns that defined the end of any hopes the Confederacy had of success in the West.

David’s productivity is matched by his partner in this endeavor, Eric Wittenberg. Eric, an Ohio attorney, has carved out his niche as the primary cavalry historian of the Civil War. While primarily an Eastern historian, in matters of cavalry Eric reaches across the spectrum. Given the products of each, my assumption is that Eric took on all things horse, and Dave took the rest. This is important because it is not clear how this book was written.

Some may view my statement as critical—far from it. Usually, a book written by two people has a clear flavor that permits the reader to see the distinct traits of the writer of a certain section. I cannot find a degree of separation in the narrative. It is flawlessly integrated and appears to have been written by just one person. My guess would be that Powell was the lead, but I honestly don’t know. It doesn’t make a lot of difference; the book is well written and well edited.

Tullahoma is, of course, a relatively bloodless campaign, and in the annals of the war, such activities do not appear to impress the national leaderships with the skill in which they are conducted. With the bloodbath at Gettysburg and the huge capitulation of the Confederate garrisons at Vicksburg and Port Hudson, combined with the opening of the Mississippi River, the occupation of Tennessee (sans Eastern Tennessee) was widely panned, and when the impact of Chickamauga was felt, I understand Rosecrans’ frustration. It was a masterful accomplishment that in another time would have been widely celebrated.

The authors understood the significance of the operation, and the treatment of individual units (Minty and Wilder are widely celebrated) moves us with the armies and makes clear the magnitude of the success and the Confederate vulnerabilities. I particularly liked the treatment of Bragg’s retrograde toward the Elk River and the looming impact of the Barrens and the Cumberland Mountains. I also appreciate their treatment of the impact of the weather on the success of the Union operations.  I suspect that had the weather cooperated, Rosecrans would have brought Bragg to battle near Tullahoma, and it would have been decisive. That Rosecrans follows up this success with the maneuvers that uncover Chattanooga and force Bragg to battle in northern Georgia would have been a significant addition to the manuscript—not in detail, but merely to link Powell’s other works.

I found the book to be a page-turner.  While such a campaign of intellect and opportunity missed might cause less involved readers to put this on the “I’ll read it later” list, I think you would err. Indeed, this is essential reading in concert with a study of the Chickamauga Campaign. One other point which you will appreciate: Most books today, regardless of the publisher, have spellcheck corrections that produce errors. In addition, the cut-and-paste of modern-day writing often creates embarrassing mistakes in context and or tense. This book is remarkably free of such irritations—a tribute to the eagle-eyed editing of the authors and the publishers. Well done.

I give this book a solid four stars and was leaning toward four and a half, but four is more than fair. This is an essential companion to our upcoming tour with Jim Ogden on the Tullahoma Campaign on August 17-20, 2021