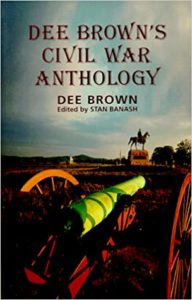 Like many of you, the name Dee Brown is somewhat familiar to me. If you collect books, you have seen many of his books in a reprint edition by Konecky Press or some other secondary publisher, oftentimes with a brown cover dust jacket, on sale for $7.98 to $9.98 at book fairs. Of course, the books are not regularly seen because they were published some time ago, and their first edition runs were as many as 79 years ago. That you see them at all is a tribute to the man and his original work, when Pulitzer Prize-winning historian James McPherson blurbs your cover, “New and fascinating material, set forth in Brown’s characteristic vigorous and lucid style,” you take a second look.

Dee Brown is a Western legend who wrote nearly 30 books over a career spanning about 60 years—a dozen of them were works of fiction based on real historical events such as Action at Beechers Island, Killdeer Mountain, and Showdown at the Little Big Horn. When you contrast those with his works of nonfiction, such as Bury my Heart at Wounded Knee: An Indian History of the American West; Fort Phil Kearney, An American Saga; and The American West, it is hard to know where the storyteller stops and the historian begins. I am writing this review of course because he put forth three specific Civil War, nonfiction titles on Grierson’s Raid: The Bold Cavaliers: Morgan’s 2nd Kentucky Cavalry Raiders; and The Galvanized Yankee—none of which I have read, but whose robust narrative commands attention if you are interested in mounted operations.

Brown was already a legend when his editor, Stan Banash, coaxed him into doing two anthologies of his works and interests. Banish was perhaps 55 and in his writing prime. Brown was pushing his late eighties when he agreed to work with Banash to put out a Western anthology and a western Civil War anthology. As happens in these types of collaborations, the core of the text is extracted from published works with perhaps some additional wisdom from some 30 or 40 years of additional reflection, tossed in for good measure. In this interest, Brown wanted to stay Western and primarily mounted, and so the 14 chapters cover lesser-known events such as Wilson’s Creek, Pea Ridge, Chickasaw Bayou, Grierson’s Raid, Morgan’s Great Ohio Raid, Brice’s Crossroads, and some efforts to free and arm Confederate prisoners of war which led to the “Galvanized Yankees”—Southerners who agreed to fight for the Union in exchange for freedom from prison. Most of those men ended up fighting Indians in the Northwest. Brown said quite honestly if you want to read about Gettysburg and the big eastern battles, find another author.

So what do we have? The core of the book is from Brown’s earlier works and, without question, the younger Banash culled cogent and interesting narratives from Brown’s published works. Because Brown was an accomplished storyteller, the chapters such as the ones on Brice’s Crossroads and Chickasaw Bluffs came almost wholly from the works of Ed Bearss and Morningside Press—given that Morningside Publisher, Bob Younger (Sweet old Bob—SOB), was a direct descendent of the infamous Younger Brothers of Missouri Civil War and Bank Robber fame, I do not doubt there was some friendly cooperation to craft the brief narratives that Brown added to the book.

My narrative is conservative because I do not know what to make of history written without citations and footnotes. I can accept that an excellent writer may also be a good historian, but when a historian writes both history and fiction with seeming ease, I am reminded of the admonition the late Winston Groom once shared with me … After Groom’s runaway success with Forrest Gump and other works of fiction, he wanted to turn to his real love, which was writing history. He asked Shelby Foote, a good friend of his, along with the legendary writer Willie Morris, and they both advised that to sell books when a good story and history conflict … tell the story. Absent footnotes, I enjoyed the story because I did not have the time or, for that matter, the cheat sheet from the “Historian” Brown as to where the facts lie. 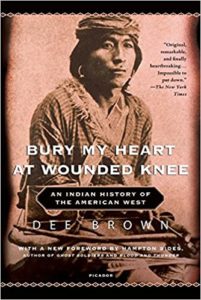 I enjoyed the stories and it is time well spent. But, there are rules when you write history, to allow other historians to vet the work and or build on it, and in that, both Brown and Banash fail. Fiction always outsells history because the writer is unconstrained by the opinions of other historians. He is writing for entertainment and the rewards for fiction writers are substantial. Brown’s book on Wounded Knee, represented as fact, has sold some 4 million copies in 17 languages and is still in print some 51 years later. For that reason, Brown could write as he did. Clearly, there is considerable respect for him in many important circles. But, I just do not know enough about the West to accept him at face value. Publishing two anthologies at age 92 certainly suggests an effort to shake another nickel out of the dusty coin purse, but, hey, I own four of his books, and this anthology is the first I have read. It was a good read, and were I more liberal with my time, I might have picked up Grierson or Morgan’s Cavalry, but I will resist the urge. Tim Smith and James Ramage have both done the spadework with their nonfiction works that I can learn from them what I want to know about those Civil War events. As for those other events that Brown included, he used sources such as Bearss and Bill Shea, later writing a 20-or-so-page essay. I have read his sources and he does not teach me anything new.

Read these for the pleasure of reading an excellent writer.