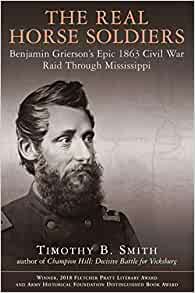 There is perhaps no Civil War operation that is better known but which no one knows anything about than Grierson’s 1863 raid through Mississippi in April–May 1863. Made legendary by John Wayne’s popular 1959 movie, The Horse Soldiers, most everyone thinks that Grierson had a confused and intransigent doctor harping on him every step of the way and a Belle Boyd–type Southern Belle who was going to blow the cover on his ops unless he took her along as a hostage. Yes, Newton Station was the objective, but everything beyond that we do not know.

This familiarity with a factually empty story has left us for years thinking that we know something that we didn’t know. There has been other scholarship on the operation by the well-known historian D. Alexander Brown, written in 1954, and numerous other relatively unknown historians. The greatest problem was a lack of documentation—hell, we didn’t even know where they actually rode. As a result, few ever attempted to follow in Grierson’s footsteps, and fewer still could tell you what and how this took place. Tim Smith fixed that.

A manuscript from Grierson recently appeared and it has now been published. However, Smith did the hard spadework to understand what the raid was and what it was not. In doing so, the operation now is no longer a stub in an encyclopedia but rather a complex military operation designed to effect a necessary diversion and whose decision points created confusion and misdirected counter operations that distracted the Confederate commanders at the very time that General Grant was executing perhaps one of the most daring operations of the war. The linking correspondence clearly shows the sophistication of the thinking and the importance of engaging the correct officer to lead the charge. Grierson was not a high-ranking officer, but he had early on impressed his superiors with his abilities, and this was indeed Grierson’s Raid.

What we learn is the manner in which Grierson organized his columns and what he did with each one—distractions, each like the petals of a flower unique and special and confounding to the responding enemy. Of course, Grierson was headed for the railroad between Jackson and Meridian. It was a supply line from the east and was critical to the support of the Mississippi capital city and the strategically significant post of Vicksburg at a key bend of the Mississippi River. Newton Station was indeed the objective such as it was for Colonel Marlowe (John Wayne); disruption and destruction of the line would deprive those two significant sites of the communications and foodstuffs needed to sustain them.

We have learned much from cavalry raids and the decisions commanders make. Famous raids like Stuart’s June 1862 Ride around McClellan and Grierson’s Raids were not preordained. In both instances, the commanders were expected to return the way they had come, and in each instance, they opted to continue onward to avoid having to deal with the pursuit of the enemy.  For Grierson, this determination to move forward to perhaps cooperate with Grant’s crossing was later changed a third time to go onward to Baton Rouge, a complete change of base that deprived the Union of Grierson’s forces in Tennessee and Northern Mississippi. What is impressive is that this is a horse ride to confound the enemy generally devoid of military engagements. The drama of the raid is in the timing of the pursuit and the challenges involved in crossing the rivers. The element of surprise sustains Grierson’s momentum and allows him to succeed. The length of the ride both in terms of miles and duration challenge Grierson to manage and replace his horse flesh without running out of steam which would have courted disaster—similar to what Abel Streight faced in western Georgia with Nathan Bedford Forrest.

This book is well written with plenty of meaningful narrative that uncovers the century-and-a-half shroud that blanketed and prevented us from understanding the campaign. As a result of Smith’s research, we have a much more approximate routing of the columns that make it possible to do a meaningful tour—indeed, BGES is planning with Smith to do his first group tour of the raid for us in either March 2021 or, if Covid is still afflicting us, in August 2021. We anticipate this becoming part of our eight-part Vicksburg Campaign curriculum on the next iteration.

Smith’s work positions him to be the next great scholar of the Vicksburg Campaign, and his expanding chain of scholarly research is now extending into the most important campaign in the western theater. I believe anyone interested in this campaign who has done it with BGES really needs to attend his tour—it is a newfound and major important piece of the mosaic that Grant wove in 1862–1863.