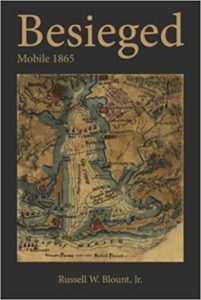 In 1861, Union commanding general Winfield Scott articulated the Anaconda Plan, a strategy that would defeat the nascent Confederacy by closing down all its lines of commerce, thereby depriving it of a commercial base. Closing ports of trade would deny the South the revenue and intercourse with the rest of the world that would form the basis for economic viability. The largest city in the South was New Orleans; however, on the Gulf Coast, the largest inland port and sheltered bay was Mobile Bay. As a military target on the Gulf Coast, there was no place more significant. Protected by three forts—Morgan, Gaines and Powell—the armament reflected the importance of the resource.

Most Federal plans included the capture of Mobile and perhaps, if the capital of the Confederacy had not moved from Montgomery to Richmond, it would have happened much earlier; but that is not how the war progressed. Once the Mississippi River was reopened and secured, interest in the West waned as the largest armies and battles were fought in Virginia. Grant’s plan for victory included a movement with three armies against Atlanta, about 375 miles northeast of Mobile. With railroads cut and communications drastically restricted, Mobile found itself relegated to the backwaters of the war. Although Grant wished Mobile taken, the Red River campaign became politically more attractive, and it was not until Admiral Farragut sailed past Fort Morgan and defeated the small Confederate flotilla in early August 1864 that this final Confederate port on the Gulf Coast was closed.

I said last month in reviewing Paul Breuske’s The Last Siege, The Mobile Campaign that the definitive work on the campaign has yet to be written. With the publication of Besieged, Mobile 1865, we now have all the components but not in one place.  West Wind, Flood Tide is the best account of the Battle of Mobile Bay; Brueske has uncovered the human dimension of the life in and around Mobile and with the soldiers and civilians on both sides; and now Russell Blount has provided a pithy, fast-flowing narrative of the final campaign against Mobile with the operations against Spanish Fort, Fort Blakeley, and Batteries Huger and Tracey, combined with the occupation and the surrender negotiations—all in just about 120 written pages.

I like the work but am still again disappointed that this keeps coming in bits and pieces—a wonderful book is still waiting to be written that is a one-stop shop. This work is the final 30% to 40% of the whole story.

Blount has written an excellent summary. It is efficient and inclusive. Having said that, it has more the feel of a monograph as opposed to a campaign study. The narrative is Blount’s—it is what you buy a book for, that is to understand how the historian synthesizes their research and then weaves it into their interpretation of the event. Sadly, the sources are minimal and many cited as “primary sources” use the published works of others who have edited and published primary sources—that is, looking at evidence through someone else’s glasses and risking perpetrating any errors that the original editor may have made. Whereas Brueske had a bibliography of some 15 pages, Blount has shared but 4. I liked the balance of end notes to pages—238 in 139 pages. This is significant in that it ensures that the emphasis is on Blount’s interpretation of the data he evaluated rather than an endless recitation of individual quotes and block quotes which populate Brueske’s work. Ironically, the two work well together, and so my recommendation is that if you want to get a full feel for these last operations, you need to read both books. And if you are to understand the entire campaign then you need Jack Friend’s West Wind, Flood Tide on the Battle of Mobile Bay. Incidentally, I am not discounting Chester Hearn’s multiple books on Gulf Coast operations and leading personalities; my focus is on this relatively recent scholarly activity on this particular campaign.

In evaluating any book, a major consideration is what was the author trying to accomplish and did they do so? Blount’s introduction says what he intended to do was “presenting an account of the military operations of the Mobile Campaign in the last year of the war … I did not foresee that I would end up writing about such things as the every day miseries of the citizens … it was obvious to me at least one story could not be told without the other….” He achieved that with few wasted words and sufficient stories and examples to support his personal narrative. He never intended to do a deep-dig study and, indeed, could he have done so, he would have in his own words limited this to an account of the military operations. That it had to include the other elements should have forced him into a more detailed treatment, and that did not happen.

Thus, while I loved everything I read and found it intensely interesting, it left me wanting more, and he never intended to go there. So I give this book a solid three stars. But, like Jack Friend’s book, had he put more time into it and accepted that his initial focus was inadequate and reordered his research and thinking, this could have been THE book on the campaign. A very good read in combination with other books.