After the Civil War, southerners were faced the challenge of reintegrating back into and moving forward to help rebuild their nation. Award-winning author Stephen M. “Sam” Hood, in his new book Patriots Twice: Former Confederates and the Building of America after the Civil War, dives into the contributions of more than 300 Confederate soldiers, sailors, and government officials who greatly influenced the postwar United States in positive and enduring ways. Several became Supreme Court justices, for example, while others became elected mayors of unlikely cities including Los Angeles and Minneapolis. One co-founded the Sierra Club, while others served as presidents of illustrious universities, including the University of California, Berkeley. It’s an important look at how former opponents put down their guns and found common cause to keep the United States united. We caught up with Sam to discuss his new book, slated to be published on September 29, 2020.

BGES Blog: To start the interview, could you please elaborate on the goal and argument of the book? How did you come up with the subject?

SH: I am obviously a history nut, and biography is my favorite genre. I agree with Ernest Hemingway, who said that every man’s life, truly told, is a novel. When the anti-Confederate social and political movement accelerated a few years ago, out of curiosity I started looking into the postwar lives of former Confederates whose monuments were being destroyed or removed and the names of landmarks changed. I was immediately shocked at the postwar accomplishments of many of the men, and the number of them who reached the heights of prominence in the federal government, education, science, and industry.

BGES Blog: How did you whittle down the selections? What was your criteria?

SH: The criteria changed constantly. The longer I researched and the more impressive Confederate veterans I found, I was forced to continually raise the bar on inclusion in the book. I must admit often feeling guilty while excluding hundreds of Confederate veterans whose lifetime accomplishments greatly exceeded my own.

BGES Blog: What are one or two of the most surprising stories that you came across in your research?

BGES: How would you defend those Civil War soldiers who are being called traitors?

SH: Oh my. This question could be a book itself. Not only were Confederates not traitors by the legal definition, as proven by the fact that no former Confederate was ever indicted for treason, much less convicted, but even from a practical standpoint they engaged in no treasonous conduct. The 11 Confederate states seceded and formed their own nation; they did not desire nor attempt to seize control of the United States federal government in Washington, D.C., which would indeed have been treason. Each state seceded politically by passing laws with the consent of a majority of its citizens, and then created a new nation. Each Confederate officer of the U.S. Army and Navy at the time of secession formally resigned their commissions before volunteering their services to the Confederate military. Confederates were for four years citizens of a country other than the United States, and in fact were treated as such, both during the war and afterward.

BGES Blog: Is there a particular narrative out there, any misconceptions about the war, that you disagree with, which won’t go away?

SH: In addition to the above answer, I would say that the perception that disappoints me the most is that most people don’t realize that probably 99% of the Confederate soldiers who served in the war were not the politicians who started the war. The soldiers who died, felt that they were defending their homes, and most Confederate monuments being destroyed or removed are dedicated to those common Confederate soldiers. In fact, extensive scholarly studies have been conducted on the reasons why Confederate soldiers fought, and retaining the institution of slavery as a stated reason was almost nonexistent. I often point out that the Vietnam Memorial in Washington, D.C., honors the men and women who died during the war, not the reasons that Presidents Kennedy, Johnson, and Nixon sent them. I believe the same logic should apply to Confederate soldiers.

BGES Blog: What do you hope the impact of this book will be?

SH: I believe that a person’s life should be judged on the whole, and Confederates were no different. The men who appear in my book contributed not only to the reconstruction of the American South, but the growth and development of the United States as a whole in the decades after the war.

I find it astounding that the very men who tried to kill each other for four years forgave each other and reconciled for the good of the country, yet many people 150 years later reject that reconciliation and forgiveness. Hopefully that will change.

SH: I believe Hood would appreciate the acknowledgment of the postwar accomplishments of his former comrades in arms. He urged patriotism and assimilation into the new realities of life in the South, telling a gathering of Confederate veterans in Charleston, South Carolina, in 1875: “Obey the law, make as good citizens as we proved soldiers.” Most did, and many appear in the book.

Patriots Twice: Former Confederates and the Building of America after the Civil War will be released on September 29, 2020. We have a special relationship with Sam and have made arrangements for signed first edition prints of the book when it is released. You can order your advance, autographed copy (copies) by clicking here. 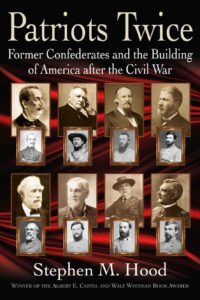