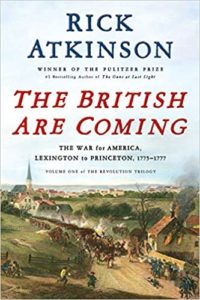 I love a single malt scotch and my favorite is GlenFarclas 105. It is hard to come by and I savor every single drink—I could drink it every day, but it would all go away quickly, so I have three bottles to tithe me over the coming years. The historical works of Rick Atkinson are the current Glenfarclas 105 of historical writing. Taken a volume at a time, my past 10 years have been enriched by four books and now a fifth. My time with Rick is time well spent and immensely rewarding.

So, having completed his Liberation Trilogy on victory in North Africa, Sicily, Italy, and Western Europe during World War Two, I was delighted to learn he was now going to turn his considerable skills to the American Revolution. There are few true phenomenal writers in each generation, and the 67-year-old Atkinson is at the head of the list for the current generation. Blessed with exceptional narrative skills, he as a writer is in the same category as the legendary Bruce Catton, Shelby Foote, Winston Groom, and David McCulloughWe are blessed to have the likes of this Pulitzer Prize–winning historian and journalist in our generation.

Atkinson has determined to present the American Revolution in three volumes, and this first work brings the earliest antecedents of the conflict to our mind almost immediately. With the opening providing a compelling portrait of King George III and his entourage, we are immediately thrust into the core concerns of empire versus colonization. In the 160 or so years of English presence, the colonists had adapted and expected freedoms that came from being far beyond the direct control the Crown and the British Parliament.  Atkinson quickly brings us through the efforts to raise revenue in the wake of the costly Seven Years War with France. The cost of the security of the colonies seemed a reasonable expense to pass on to the people who benefited.

Most of us know the critical events that led to Lexington and Concord, but it is very pleasant to walk the path with Sam Adams, Paul Revere, and Joseph Warren. The conversion of Boston to a military camp and the corrosive effects of the closing of Boston Port put a short fuse in the powder keg that exploded on April 19, 1775. What is most significant and frequently forgotten is that the war was fully engulfed more than a year before the Declaration of Independence and that efforts at reconciliation were ignored by the Crown.

The level of detail and the manner in which Atkinson steers his readers is a journey of wonder: Washington accepting command, the crisis of the powder, the inability to get at the British while the British command the fields of maneuver, and the mistakes at Bunker Hill all read like a fictional narrative, but then, when you look at the end notes, you realize that history is far better than fiction.

I appreciate every element of Atkinson’s work. I usually believe no book is perfect, but this one is as close as it is possible to be. The description of often overlooked operations at Great Bridge and Moore’s Creek, the burning of Norfolk (my childhood city), and the detailed treatment of the 1775-1776 invasion of Canada are all compelling. Indeed, were I to continue the narrative of superlatives, this review could be a good deal longer and would be a regurgitation of the first 18 months of the war all in less elegant prose than Atkinson has already clearly and efficiently written.

This book and the events of the early revolution stand on their own. The story is much longer, but like a bottle of fine scotch, the reader can and will savor this until another volume is purchased. I will violate my own standards and give this book a solid five-star rating. I do not believe he could have improved on a thing. Take this like you would take a trip to a spa. Get and read it for the pure pleasure of reading. You will not be disappointed in anyway.