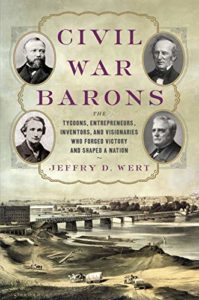 Every once in a while, even the most disciplined reader comes upon a break in their routine that makes sense and which brings an unexpected surprise and pleasure. Having received this book as a gift from my daughter for Christmas last year, it had to be on my to read list even if I was never going to get to it. Having slogged through a longer volume that was longer than I wanted to tackle at one time, I drifted to a current affairs book, and when that didn’t drive me back to the job at hand, I picked up Jeff’s book. Three days later I wondered, what did I wait for?

Civil War Barons is a relatively short and tight book. At 209 pages, it is an easy read in any circumstance. I have known and respected Jeff Wert for some time. A former history teacher in Pennsylvania, Jeff long ago earned the respect of the Civil War community, and his frequent publications since then always are well researched and written. With more than 10 books and far more articles on his résumé, you cannot say you are well read on the war unless you have read some of his works—especially his book about James Longstreet. So it was with reasonable expectation that I opened the cover and dove in.

The literature of the Civil War has produced any number of thematic derivatives, and so this work by Jeff was a new and, as it unfolded, intriguing angle about civilian support for the war effort. I have long maintained that we cover the period before the war and after the war because people just were not there when the shooting started, and they didn’t go to a remote island after the war ended. Jeff shows in a compelling fashion how key people in a variety of innovative ways built the support infrastructure that made the Union war effort successful. The names are generally familiar: Vanderbilt, Armour, Borden, Carnegie, Deere, Squibb, Parrott, Weyerhaeuser, and many others.

Jeff offers mini biographies on his subjects that describe how each one came from a position of strength or failure to address the challenge and opportunities presented by the Civil War. The stories of condensed milk, canned meats, lumber, wagon building, artillery, rapid fire weapons, farm instruments, and medical advances work together to help the reader understand how each and every contribution accumulated to provide the resources needed to win the war.

It seems that in our studies we far too often take for granted these support elements, and yet the evolution of repeating rifles, the construction of multiple gunboats in just over 90 days, and the ramping up of shoes mechanically stitched to meet the needs of the growing army are miraculous in their adaptive and functional performance. I recall being a youngster in the 1960s and buying U.S. Savings bond stamps two and three at a time, and yet here is the story of Jay Cooke who revolutionized fundraising from the public as a whole by selling bonds. It is simply amazing to contemplate.

Not all turn out well, and not every person was a good guy. Some were simply ruthless and made money far in excess of what they would ever need or spend in their lives. Many overextended themselves or were unable to sustain their success after the war. Others extrapolated their processes and changed to meet the demands of the following Gilded Age. Some were selfless in the face of national need, and others were successful rapscallions. What struck me was how these developments unleashed American capitalism in all of its raw power and lifechanging potential.

I am a better informed person as a result of this work. It is not mentally taxing, but, frankly, Jeff’s genius in the selection of his topic has filled a significant niche that one could live without, but if you happen upon it you will have an epiphany. I think this book is worth your time and would give it a solid 3.5 stars, maybe even 4, on a 5-star scale. Strongly recommended!