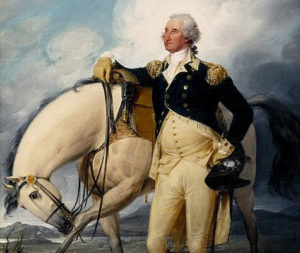 As we approach the 250th Anniversary of the Revolutionary War, this landmark period in our history is already in the midst of a renaissance with a renewed dedication to “The Cause” expressed in literature as well as in the arts. Fresh attempts during the Digital Age to address the history of the Revolution and the War that it spawned have produced new discoveries and intriguing interpretations of traditional sources. More fortuitously, lands and properties have become more accessible today than they were even at the turn of the 20th century. For interpretive history programs, this renaissance has produced the most accurate and exciting results imaginable; in some instances, an up-to-date tour of the battlefields and other sites related to a military campaign has rendered obsolete similarly themed programs even a generation ago. This is particularly true for the Philadelphia Campaign (1777), Valley Forge (1777-1778), and the Monmouth Campaign (1778).

BGES will offer an updated, Revolutionary War program in a three-part, three-year series that chronologically covers all three campaigns. Beginning in the third week of June 2022, we begin with the first half of the Philadelphia Campaign. Our tour leader for this series is historian Gary Ecelbarger, a 20-year veteran of touring this campaign who is nearing completion of the manuscript of his 10th book, George Washington Between the Fourths—a single year campaign biography of His Excellency and his headquarters, July 4, 1777 to July 4, 1778. This perfect pairing of guide and history theme assures a top-notch offering by BGES.

6:00 PM: Meet at the headquarters hotel to greet all the members of the program as well as pick up your nametags and handout packets. Gary Ecelbarger will present an introduction to the summer of 1777 and follow up with an overview of the program, including a Q & A session.

Dinner is on your own; hotel is included.

8:00 AM: Our first destination is the Jacob Holcomb house on the New Jersey side of the Delaware River. Using this period home as a backdrop, we will discuss the immediate, short-term, and long-term issues that confronted Washington’s army and the country at his very headquarters from the final days of July 1777.

We will then leave this beehive of activity as Washington often did, and we will head to Coryell’s Ferry (now Lambertville) and view Washington’s new 1777 crossing of the Delaware seven months after and nine miles above his more famous Christmas night 1776 site.

Washington had his hands full, and we will trace his ride to Philadelphia to investigate points of defense he would take against Howe’s advance. You will particularly appreciate the street view of the City Hotel, where Washington spent four nights and where he first met the Marquis de Lafayette.

After lunch in the historic district of Philadelphia (we recommend a Philly cheese steak), we will visit the Museum of the American Revolution. There is much more to see today, and we will leave colonial-era Philadelphia to three colonial encampment sites: the East Falls camp, where Washington and Lafayette reviewed the army on August 8; Stenton, where Washington camped with his army on the night before they paraded through Philadelphia, and finally the Moland house. It was here on August 22, 1777, that Washington committed to a bold strategy for the relief of Philadelphia.

Back to the hotel. Lunch and dinner will be on your own.

8:00 AM: Yesterday you learned Washington had committed to defend Philadelphia. We pick him up at a council of war on August 24 at a crossroads in Darby, Pennsylvania, where Washington will decide how to confront the Crown Forces threatening Philadelphia. He determines to get his own sense of the emerging problem, and we will follow him as he performs a reconnaissance to Head of Elk in Maryland. An interesting stop is at Quaker Hill and the gravesite of John Dickinson—the Penman of the Revolution. We will tell you about Washington’s “Pen Men.” We will then view the British landing site on the Elk River—a spot rarely visited by any tours. It’s a shame, because you will begin to appreciate where this enormous armada of 260 vessels docked with an army of 16,000 ground forces.

After lunch in Elkton, we venture to Cooch’s Bridge, the only Revolutionary War battlefield in Delaware. Here, Maxwell’s light infantry force battled on September 3. Then we head to Red Clay Creek to view the American defensive line throughout the first eight days of September. We then move to pick up Howe’s advance on September 8, which precipitated the Americans’ falling back to the Heights overlooking Brandywine Creek. We end our tour by retracing Washington’s steps into Pennsylvania. His headquarters at the George Ring house was properly chosen, as you will learn.

Back to our hotel. Lunch is included, but dinner is on your own.

8:00 AM: Our entire day will be dedicated to the September 11, 1777 Battle of Brandywine. We will view the American and British/Hessian positions at dawn’s first light and follow the attack of General Knyphausen’s division against Maxwell’s light infantry at Welch’s Tavern and Kennett Meeting house. We will then join Washington as he inspects his lines along Chadds Ford, including a rare look at the primary American artillery position.

After lunch in Kennett Square, we will follow the Howe/Cornwallis impressive flank march. Of prime importance will be the newly discovered location where Howe was sighted by Maj. James Ross, who then sent a convincing dispatch to Washington warning him that he was flanked. We will follow that flanking march on colonial road beds near the crossing site of Trimble’s Ford and at the exact location of Jeffries’ Ford, and will continue to move along with Howe’s and Cornwallis to Osborne Hill.

After a respite at the Brandywine Visitor Center, we will head back to the Ring House, where Washington and his military family attempted to clarify the confusing intelligence coming into headquarters. George Washington moved rapidly to Dilworth Tavern, then headed to Birmingham Hill to sadly witness the decisive action of the battle as Cornwallis’s Hessians and redcoats decimated three divisions of Washington’s Continentals. We will visit the American lines, including the spot where Lafayette was wounded. The battle will close near the Brinton house and where we will discuss Gen. Nathanael Greene’s final action of the contest. This was the largest and longest single-day battle of the Revolution. It deserves and will get a summarization and analysis before we head back to the hotel. The British had had a good day, which we will be considering from their perspective at Howe’s HQ. What options lay before him? Why did he choose to hold this position?

We will provide lunch and dinner.

8:00 A.M. We will begin a final, full day of touring by analyzing the week that followed the Battle of Brandywine. We will head over to Manayunk, where we will overlook the modern water breaks of Levering’s Ford, where Washington crossed his army over the Schuylkill River and moved via the Lancaster Road on September 14. Washington needed some distance from Lord Howe and we will follow the Continentals as they sought ground from which they would attack General Howe. We will make a slight diversion to pay our respects to the remains of Gen. Anthony Wayne, a division commander in the Continental Army and a future general commanding the U.S. Army.
Returning to the Old Lancaster Road, we will pass Warren Tavern and halt for a view of Malin Hall, occupied by Washington September 15-16, 1777. This residential home today is the seventh still-standing structure we will see in this program that served as headquarters. (Washington really did create a long list of “Washington Slept here” sites.) Here we will discuss Washington’s plans and deployment that led to the abortive “Battle of the Clouds.”

Following lunch, we head back to our final battlefield of this trip. First stop is South Valley Hills at Immaculata University, where Gary will provide you with the newly developed interpretation of what happened and did not happen this day. We then will traverse the Great Valley and view the final American deployment at the appropriately named “Battle of the Clouds” Park. While here, we will head over to another original colonial structure, which was a major feature of this region in the 1770s—White Horse Tavern. Although it is generally inaccessible, we will have access to the property.

The final element of this program will follow the Americans from the Battle of the Clouds to Yellow Springs Tavern. Here, weather made a bad march even worse—they were pounded by an unrelenting Nor’Easter. As the pace of the retreat slowed, Yellow Springs will share another gem with us—the actual foundation of the main hospital used to treat sick and wounded Continentals. Our final stop of this tour is a dramatic one involving two famous Revolutionaries — Alexander Hamilton and “Light Horse” Harry Lee (the father of Robert E.) — who are both tasked with moving supplies from a magazine at Valley Forge and confront British troops there. We then will summarize part one of this three-part, three-year program in front of another Washington headquarters. This sets the scene for Part 2 in 2023. We will see you there.

Lunch is provided, but dinner is on your own.

Gary Ecelbarger is an award-winning author of nine books relating to 19th-century personalities and events, as well as more than three dozen monographs, essays, and articles of Revolutionary War and Civil War-era topics. As a historian, symposium speaker, and tour guide for the past 25 years, he has led his audiences through complex campaigns and prides himself on crafting well-researched, thought-provoking programs that maintain an intriguing, chronological flow and feature off-the-beaten-path historical sites. This first installment of the “Between-the-Fourths” series exemplifies Ecelbarger’s dedication to this topic as illustrated not only by his current manuscript, but also by five articles he has published in the Journal of the American Revolution that directly relate to this August–September 1777 portion of the Philadelphia Campaign.

The servicing airports are Philadelphia (PHL), 28 miles away; and Trenton (TTN), 44 miles. Both will require a rental car to get to King of Prussia.

You will receive maps and a reading book that will meet your onsite requirements. The following books are suggested to enhance your readiness for the program. Amazon.com has a program to support non-profits IF YOU SIGN UP to support Blue and Gray Education Society (EIN 54-1720582) at AmazonSmile. When you sign up there rather than the normal Amazon site, one-half of one percent of your purchase price will be provided to BGES as a donation from Amazon. This will apply not only to this purchase but others you may make at other times. Thank you.

This program includes the services of your historian, a tour director, three lunches, one dinner, a reading book with maps, appropriate transportation for the registration, and light refreshments and snacks.

To register by mail or fax, download this printable registration form: Washington Between the Fourths in 3 Parts: Part 1: Recrossing the Delaware River to Brandywine and the Clouds