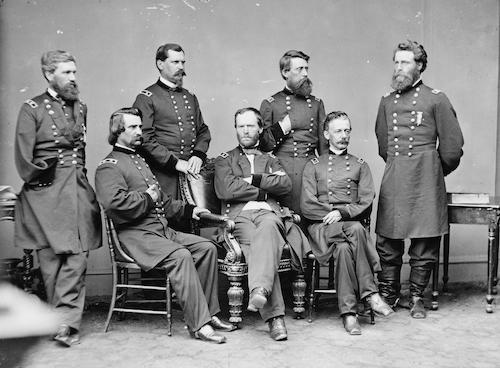 After nearly nine months of tedious siege and repositioning, Union armies were poised to end the Civil War in the spring of 1865. As Sherman entered North Carolina with his four corps, he expected logistics support and additional manpower from the North Carolina coast as he maneuvered to join Meade and Butler near Petersburg. Together they would crush Robert E. Lee’s diminishing force and capture the Confederate capital in Richmond. But the Confederates were not yet “Up the Spout,” and a seasoned but greatly reduced force under the command of Gen. Joseph E. Johnston assembled to resist him.

This study will give you an in-depth look at two of the largest battles fought in North Carolina, Averasboro and Bentonville, as well as an opportunity to examine the significant events and places that preceded the largest Confederate surrender of the Civil War.

Read more on the BGES Blog: “Tour Talk: To the Bitter End: North Carolina in 1865, with Bert Dunkerly and Wade Sokolosky,” published in January 2020.

8 PM. We’ll meet at the Hampton Inn Spring Lake Fayetteville hotel where your historian, Len Riedel will provide a detailed overview of the events leading to Sherman’s operations in North Carolina. You are free to find dinner on your own. This is eastern North Carolina, and its distinctive BBQ is some of the best in the country, Smithfield’s (SCNB) is a popular chain.

Our early start at 8 AM will let us get to Cheraw, South Carolina where the Confederates made their last stand and Sherman prepared his troops to enter the Tar Heel state. We will first stop at the Confederate defensive line along Thompson’s Creek checking out Powder Ravine. We will then discuss the March 3rd skirmish for the bridge over the Great Pee Dee River and visit the site of the pontoon crossing by Sherman’s right wing and the XX Corps. Moving away from the river we will visit antebellum sites in the old downtown. Our sortie to Cheraw ends with a drive by of Sherman’s headquarters at the John Craig House and OO Howard’s headquarters at the Enfield House and lunch in town.

Our afternoon travels will bring the rest of the Union force into North Carolina and we turn towards Fayetteville. This finally shows Confederate commander William Hardee that the Federal objective is not Charlotte or it’s critical railroad. As Hardee’s Confederates withdraw a new Confederate commander is brought in to organize the last ditch defenses, Joe Johnston is Robert E. Lee’s choice to buy time and perhaps offer an improbable opportunity to join forces, turn on and defeat Sherman. We will then have a photo op at the Chesterfield County Court House site of the first secession meeting in South Carolina. We then head over to Mount Croghan to march with the Federal XIV Corps into North Carolina and pick up an unexpected cavalry engagement at Phillips Crossroads near Wadesboro—here the Confederate cavalry under Joe Wheeler hit the unsuspecting Judson Kilpatrick’s disordered force a stinging blow. The remainder of the day takes us through Aberdeen, NC to see the Malcolm Blue House and Bethesda Presbyterian Church as we follow Kilpatrick’s route to what would end up being the battle of Monroe’s Crossroads. We should end the day by 6:30 so you can get dinner on your own—lunch is included.

A major reason to come on this tour is our access to Fort Bragg Military Reservation and the Monroe’s Crossroads Battlefield. We have tentative approval to visit the site this morning. As it is on an active ordinance range and one of America’s most important military installations (Home of the Green Beret and the 82nd Airborne Division). The Army has extensively examined and indexed the battlefield and you will be fortunate to visit the site. Kilpatrick gets licked and is literally caught with his britches down.

Please note that real life military requirements could shut down our access to the site and or the base real time as our modern warriors prepare for their mission. If this happens, we have a B plan. Either way you will have a wonderful treat.

Following the engagement at Monroe’s Crossroads, Sherman began his move north, expecting to refit his worn forces around Goldsboro before entering Virginia. However, Johnston had consolidated his forces with those under Gen. Braxton Bragg and was prepared to meet Sherman and hopefully dismantle him in detail—frankly, he did not have the forces to fight a toe-to-toe engagement. The man Johnston selected to pick off the left wing of Sherman’s army was Lt. Gen. William J. Hardee, who would anchor his flanks on the Black and Cape Fear Rivers near the small hamlet of Averasboro.

Realizing his limitations, Hardee dusted off the tactics from a great American military victory during the Revolutionary War—the battle of Cowpens in South Carolina. Mixing newly fielded but untried coastal battalions with his veteran infantry and cavalry, he created a defense in depth of three lines. Each would take some of the starch and energy out of the Federal advance, until it ran into the third and most experienced line of Confederate troops. Ironically, as had happened during Cowpens, it was friendly (Confederate) cavalry that stabilized the combat zone. The two-day engagement purchased deployment time for Johnston’s main force near Bentonville.

This program will start at the William Smith house, where the battle started and then advance in a manner similar to the way the battle unfolded: over 2 miles of attack, defend, and fall back. After a visit to the battlefield museum, we will visit the John Smith plantation home, Oak Grove, which served as a field hospital. The site, closed to the public, will be open to you. We will return to the hotel by 6 PM where you can get dinner on your own. Lunch is included.

Following the sharp engagement at Averasboro, Johnston was able to build off the limited success he achieved to prepare to hit Sherman in a major engagement such as he had force left to fight with. We will start today staging to Newton’s Grove following in Sherman’s footsteps as he moved towards Goldsboro only to find the Confederates waiting for him. Wade Hampton fights an effective delaying action as Johnston prepares to receive Sherman’s assault. We will stop at Cole Plantation and see the Confederate trenches built to help shield Johnston’s sparse force. We will discuss the Union attack and then highlight the Confederates major charge seeking to break the Federal force. We will finish the morning discussing General Morgan’s heroic stand.

This last major engagement in North Carolina delayed Sherman’s arrival and his access to the supply network set up to support him at Goldsboro. At Bentonville, Johnston fought 20,000 Confederates in an effective and efficient way that bloodied Sherman’s nose and reminded the Federals that there was still much life left in the Confederate armies.

The Bentonville battlefield is well-preserved and has an excellent field interpretation. You will walk in the footsteps of the men who fought there and examine well-preserved Confederate trenches. What is most interesting is the Confederate battle plan in which Johnston hammered at isolated Federal units on the first day, forcing the Federals to fall back into a defensive crouch that they sprung out of on the second day, thus forcing the pugnacious Confederates to adopt a more conservative defensive posture. By the close of the third day of fighting, Johnston realized he could do no more and he withdrew to Smithfield, conceding Goldsboro to Sherman. Lunch is included, but dinner is on your own. We will be back by a quarter past 6.

Sherman now had some 85,000 men, while Johnston’s force of approximately 20,000 dictated there would be no more battles, and so we will move the two armies into cantonment areas—Johnston moving toward Raleigh, Hillsborough, and Greensboro; and Sherman pressing toward Raleigh. Sherman soon would travel to Virginia to meet with Grant and Lincoln to get final instructions for the end of combat operations and the peace to follow. Lee’s surrender and the flight of the Confederate government set the stage for the surrender of Johnston and the Confederate forces under his command. First the drama of the assassination of Abraham Lincoln would play on the negotiations. That would be followed by the drafting of a peace treaty that far exceeded Sherman’s authority and resulted in much hard feelings between Sherman and the Johnson Administration. Finally, a suitable surrender document was tendered and the second major Confederate army was surrendered.

Today will take us to the last shot marker, Johnston’s headquarters in Hillsborough and Bennett Place. There is much pathos in these final scenes, and you will sense the moment as these warriors turned to issues of peace. Lunch is included, but dinner is on your own. We will be back at the hotel by 5:30 PM.

Len Riedel is the founder and Executive Director of the Blue and Gray Education Society. He has held this position since 1994. A graduate of the Virginia Military Institute and Old Dominion University. Riedel has a Master of Arts in History with an emphasis in Policy and Strategy. Riedel is a retired USAF officer who held command positions. He has conducted staff rides for various government and business entities and enjoys conducting a select number of tours every year. Riedel is the editor of the nation’s best selling Civil War Guide Book, National Geographic’s The Civil War, A Travelers Guide (2016).

The servicing airport is Fayetteville (FAY) but Raleigh Durham (RDU) is the closest major airport and there are a large selection of ground transportation companies in addition to the standard rental car options. The hotel and program are easily accessed from I-95. Fayetteville is serviced by Amtrak with two northbound and two southbound trains daily.

You will be provided with a handout upon arrival. The following books are suggested to enhance your readiness for the program. Amazon.com has a program to support non-profits IF YOU SIGN UP to support Blue and Gray Education Society (EIN 54-1720582) at AmazonSmile. When you sign up there rather than the normal Amazon site, one-half of one percent of your purchase price will be provided to BGES as a donation from Amazon. This will apply not only on this purchase but others you may make at other times.

To register by mail or fax, download this printable registration form: To the Bitter End: North Carolina in 1865