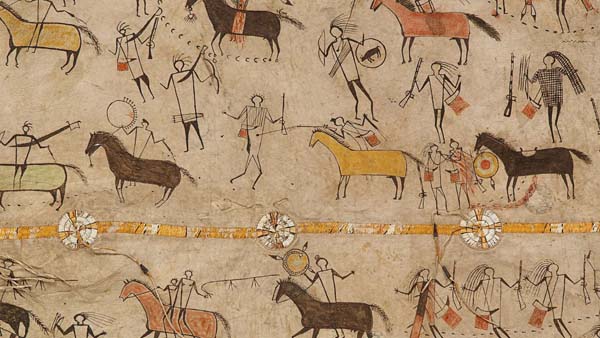 The promise of free land near Santa Fe and the Nebraska and Colorado territories sparked an unprecedented migration west with a concurrent need to protect settlers from the free-ranging lifestyle of the Plains Indians. Originating out of Independence, Missouri, this program will thoroughly ground you in life on the American frontier in the 19th century, both before and after the Civil War. As we move into the heartland of the Great Plains of Kansas, you will see great names in American history such as Dodge City and Fort Leavenworth, and the important string of forts manned by U.S. cavalry, who were charged with keeping the westward trails clear from Indian marauding. This is an important American history story told by a master American history storyteller. Come and join us.

8:00 PM: Check in at the LaQuinta Inn Hotel, Airport in Kansas City—your reservations have been made and paid for. Tour leader Neil Mangum and BGES Executive Director Len Riedel will meet you in the lobby and distribute readings and other information about the program. There are several eating establishments within short walking distance from the hotel. Hotel is included.

8:30 AM: Boots and Saddles this morning as we begin yet another of Neil’s incomparable Indian War tours—of all Len has done with him, he likes the Central Plains best! Our first stop is the National Frontier Trails Museum in Independence. The next stop is the National World War I Museum. We briefly visited on another trip and realized that you needed and deserved much more time. The day finishes at Fort Leavenworth. Western life and army service were anchored on a series of forts, and this is perhaps the most famous. We will visit the fort museum and graveyard before returning to La Quinta.

Lunch and dinner are on your own. Hotel and breakfast are provided.

8:15 AM. Have your bags out by 8 AM for loading; departure at 8:15. It seems strange being in the middle of the country that is considered to be the frontier, and yet the heritage of the area is more than 150 years old. We stop at the state capital of Topeka in Kansas to visit the Kansas Museum of History, the state’s history museum—it’s a good ’un!

Sadly, with so many forts in ruin, museums are increasingly important to the interpretative narrative that will complement Neil’s expert insights. Our next stop is Fort Harker, which will be the first in several garrisons and staging areas for the security of the trails and settlers. Fort Larned is next, and the stories here are about true Americans. There is a series of booklets about each of the forts that we will be seeing; you may want to collect them to provide a great deal of post-visit color and insight. We will continue on seeing the site of the Cheyenne Village on Pawnee Fork which Winfield Scott Hancock (sound familiar?) torched in 1867. Hancock then sent Lt. Col. George Armstrong Custer and the Seventh Cavalry in pursuit. We continue along the Santa Fe Trail past Pawnee Rock to our lodging in Dodge City—one of the West’s most famous towns.

We will stay two nights at LaQuinta Inn and Suites. Breakfast, lunch, and hotel are included.

8:30 AM: Your luggage stays put, as we depart for today’s adventure. Custer is controversial for many aspects of his Indian War experiences, and his trail to the Little Big Horn is littered with inflammatory and aggressive actions against Native American tribes. Today we will look at Custer at his destructive best as he hits a sleeping Cheyenne village along the banks of the Washita River in Oklahoma. We will examine his staging from Fort Supply and his move against Black Kettle’s Camp. There are some excellent tactics displayed here, and you will get a genuine sense of the drama of the Plains Wars. Neil is well known in the region, and you can expect excellent access to the key sites.

We will provide breakfast, lunch, and the hotel, but dinner is on your own.

8:15 AM. We depart Boots and Saddles at 8:30 but have your bags on board by 8:15. Today we take another gritty look at life on the frontier. We move with the settlers of more than a century and a half ago along the ruts of the Santa Fe Trail to the Cimmaron Cut-Off. The next stop is the Punished Woman’s Fork battlefield. This was the scene of a vicious fight between Cheyenne who were resisting the white man’s control in the fall of 1878. Led by Dull Knife and Little Wolf, its outcome was uncertain for either side. Then we examine the story of the kidnapping of four women by the Cheyenne in 1874 and will visit where the Indians murdered a settler family—sad tidings.

Our last stop before our hotel is another relic of the times: Fort Wallace. We will visit their cemetery and museum. We are then headed to either Goodland or Colby—a motorcycle rally makes hotels a little more restrictive with block rates.

8:15 AM. Boots and Saddles at 8:15 AM, but keep your bags in your room for another night. We are headed for a corner of Colorado and one of the most tactically interesting episodes of the war: both a battle and siege at Beecher’s Island. This site was the focus of nine days of drama and was not typical of the Indian wars. It is worth the time and discussion. If we can get you access, we will visit Summit Springs Battlefield—the site of the Cheyenne village of Tall Bull. Last time we only could watch from a panoramic vista, and the monuments there had been vandalized. Here, Maj. Eugene Carr, another Civil War general, and Medal of Honor recipient routed the encampment of Indians in the summer of 1869. We will then head briefly into Nebraska to Benkelman, where Custer camped in 1867 during the Hancock expedition we discussed at Pawnee Fork. This is where Custer was expected to be found by a detachment under the command of Lieutenant Kidder, who was bringing dispatches to Custer… they didn’t get there. Neil will explain why.

Breakfast, lunch, and the hotel are included. Dinner is on your own.

8:15 AM. Have your bags out by 8:15, with Boots and Saddles at 8:30 AM. Leaving here, we will close the loop started at Fort Leavenworth with a visit to the graves of the men killed in the Kidder Massacre. We will be at the site where their mutilated bodies were found. Indian mutilations were tied to their belief system, and the mutilations were graphic and grotesque. We will turn back toward Kansas City, stopping at the Eisenhower Presidential Library and Museum. Fort Hays is yet another of the important frontier forts. It is our last stop before arriving at the Hampton Inn in Junction City, Kansas.

Breakfast, lunch, and a farewell dinner, as well as the hotel, are included.

8:15 AM. Our final push will put bags on board at 8:15 and final call at 8:30 for departure. Our program starts at Fort Riley, where we will see the museum, the Custer House, and the Wounded Knee Monument. There are some excellent exhibits at the University of Kansas in Lawrence. We will see Comanche, the horse ridden by Capt. Myles Keogh at the Little Big Horn—Comanche survived! Lawrence is an important American City with strong ties to the Civil War and Bleeding Kansas. We will do a walking tour of the 1863 Sacking of Lawrence by William Quantrill. We will then head to see the small but very significant battle of Blackjack, where John Brown of Harpers Ferry fame drew blood in an encounter many believe to be the first battle of the Civil War. Our last stop will be at Mahaffey Station for a ride on an actual stagecoach wagon.

We will return to LaQuinta Inn Airport, where some of you may want to depart tonight. Those of you who plan to depart on the 25th will need to get your own room and make your reservation. The rate for us is $91, plus tax. Breakfast is included. We will probably put together an ad hoc dinner trip after returning to the hotel for those who want to join us at your own expense—we no doubt will either seek Kansas City BBQ or a Kansas City Strip Steak. Breakfast is included.

You are at RQ this morning—released from duty and free to look around. There are many neat things to see in the Kansas City area, and you may find you want to stay the weekend. Thank you for coming.

Neil Mangum, one of the nation’s foremost historians, is an expert on frontier life. A retired National Park Service official, he served as Superintendent at the Little Big Horn National Battlefield as it transitioned from Custer National Battlefield. The popular Mangum only allows himself four or five tours a year, and BGES is fortunate to enjoy his favor. He enjoys the clientele and the small folksy nature of the group that is usually well prepared. Neil is the author of The Battle of the Rosebud: Prelude to the Little Big Horn. He has a following, and most people on this trip will have traveled with him before, which makes this event even nicer.

Your registration fee includes seven nights of single or double occupancy lodging.
We will base at LaQuinta Inn, Kansas City Airport.

The arrival airport is Kansas City International (MCI]. If you drive to Kansas City, we will make arrangements for you to leave your car parked there; an additional charge may apply, or park in long term parking at the airport and take the hotel shuttle back to the hotel. The hotel will be easily accessible by automobile. Amtrak services Kansas City.

You will be provided with a reading book and maps upon arrival. If you are a user of Amazon and would consider signing up for AmazonSmile, name Blue and Gray Education Society as the beneficiary of your purchases—we are getting a quarterly check from Amazon from supporters who shop on Amazon. A percentage of every purchase, this one and all other purchases, comes to BGES. Thank you.

Registration includes 7 nights’ lodging, 7 breakfasts, 5 lunches, and 2 dinners; a reading book with maps; the academic program; support of a professional historian, and a tour director; all admissions; and transportation. We also will provide snacks, bottled water, and a limited selection of sodas. Transportation will be appropriate to the registration. A coach bus with rest room requires 20 full-paid registrants; for less we will use transportation to include passenger vans.

To register by mail or fax, download this printable registration form: The Central Plains Indian Wars