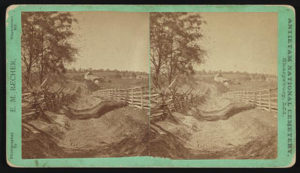 Many very learned people believe the war was decided on September 17th on the banks of Antietam Creek; here is a bloody retribution for the capture of nearly 15,000 Federal soldiers at Harpers Ferry America experienced the bloodiest day in the history of American combat. With more than 23,000 Union and Confederate soldiers killed or wounded both armies were knocked into reality. For Robert E. Lee he tasted a setback that cooled the European ardor for mediation, for George McClellan he had cornered the triumphant Lee and gave him a smacking that would end this first northern raid. For Abraham Lincoln, he could claim the victory he needed to make a major political announcement that would change the face and purpose of the war. It was a seminal moment in American history.

Over the past two decades no two historians have become more associated with the fighting and the 1862 Maryland Campaign that Tom Clemens and Scott Hartwig. Clemens has edited and published over three volumes the papers of the campaign historian, Ezra Carmen. Carmen collected statements and documentation from participants and folks who experienced the battle. He was able to place units and document elements of the combat that otherwise may have been lost to history. Trained at the feet of the legendary historian, Joseph Harsh who also created a magnificent record of the campaign and Robert E. Lee’s thinking on it, Clemens is the living repository of contemporary data and what it means to an understanding of the battle.

Scott Hartwig was already legendary as the lead historian at the Nation’s premier battlefield park: Gettysburg; however, he possessed a passion for the campaign of 1862 and has now completed research for the second massive volume on the campaign to be published by Johns Hopkins University Press. Fresh from writing the battle of Antietam we have two collegial and complimentary scholars ready and able to deliver a definitive running analysis and narrative of the great battle at Sharpsburg. You do not want to miss it.

Watch YouTube interview on this program with Tom Clemens and Scott Hartwig by clicking here.

Meet at 6 PM in at the headquarters hotel (Hampton Inn, Hagerstown) here you will meet your fellow students and interact with Tom and Scott as they talk about the campaign, its ramifications and why Antietam took place. This program is more than just a lecture it is a reflection of two men deeply invested in every element of the campaign. That qualitative difference will show throughout the program. If you have been to the visitors center and seen the movie there are Scott and Tom and also Gordon Rhea some 20 years ago—they have only gotten better. We will break in time for you to have dinner on your own

Depart the hotel at 8:00. KNOW THAT PRACTICALLY THIS ENTIRE TOUR WILL BE ON FOOT—BRING GOOD SHOES AND A FIELD STOOL AND OR WALKING STICK.

What do you think it would be like to walk the battlefield with the men who fought there? Well you will because of Tom’s familiarity and editing of the veteran’s recollections and detailed explanations the format will give you that very experience. Also many of you may recall the battle is fought in a study friendly way in that it started on the north end of the field and moved south throughout the day—thus you do not have to shuffle back and forth physically and chronologically. It is a very unique feature of this battle and it will make it easy to understand. Lunch will be included but dinner is on your own.

This morning you will start the tour walking the Cornfield Trail and following in the literal footsteps of the Union I Corps under Joseph Hooker from its step off point in the North Woods to the point of engagement with the main Confederate battle line. You will then be with Hood’s Division as they are rousted from their breakfast bivouac behind the Dunker Church to their dramatic counterattack that pushes Hood’s men back to the edge of the Cornfield on the north side of the field until they themselves are pushed back. The morning ends with the injection of the Federal XII Corps under JKF Mansfield into and across the Cornfield. Mansfield does not live to see the fight—recently placed in command he is killed almost immediately.

After lunch on the field, we will continue with the new XII Corps commander, Alpheus Williams as they struggle to cross from the East Woods to the vicinity of the Dunker Church and the high ground surrounding it. Now a third Corps comes to the field, Edwin Vose Sumner’s II Corps emerges from the East Woods after crossing Antietam Creek. Like a bull in a China closet, half of Summer’s Corps crosses perpendicular to the moring fight and into the West Woods where they encounter fire on three sides. We will finish the day as McLaws and Jackson move to steady the Confederate lines from the terrific onslaught they have sustained this morning We will leave the A Poffenberger Farm to the West Woods—some of the most terrible fighting ever encountered by US fighting men. After more than 6 hours of walking today we will return you to your hotel.

0730 depart the hotel. Cognizant of the profound meaning of September 11th in all of our collective memories, we nonetheless continue our tribute to the 23,000 plus men who left blood and many who left their lives on this battlefield.

Just as the morning fighting on September 17th ebbed, a new firestorm emerged as the right wing of Sumner’s II Corps found themselves engaged with DH Hill and the area behind the Visitor’s Center—it is a complex and easily overlooked portion of the fighting in the central part of the battlefield yet it is contiguous to the overall flow of the action that day and it will occupy a good portion of the morning. We will continue with the Roulette Farm and the grudging and static fight that rolls over the hills towards an uncertain but bloody future in front of the Sunken Road—here Generals French and Richardson spilled much human treasure but pierced the Confederate lines when a miscommunication caused a portion of the line to be vacated. The Federals press the gained advantage and soon we will find the morning ending at Tidball’s Battery.

The welcome lunch break will get you off your feet and let you all contemplate the final act to follow as we will invest about 2 ½ hours fighting out Burnside Bridge, the Confederates determined defense and the final coup de gras as AP Hill slams into the surging Federal front advancing to Sharpsburg from the south. Lee has held and we will head back to the hotel by 4 PM. You cannot say that you didn’t get the full monte. The tour is a walking tour, with plenty of water to keep you hydrated. Perhaps by the end you might understand the claim of a Federal soldier nearing the end of day who noted that as he gazed out over the field the intensity of the experience for a moment caused the entire landscape to turn slight red.

This is the meat and potatoes of battlefield studies. I cannot bring you a better team and I submit you cannot find one—pound for pound it doesn’t get any better. So when Scott’s second volume comes out perhaps in the spring of 2023, you will be able to say—been there done that! See you there.

Tom Clemens is the President of Save Historic Antietam Foundation and is the leading preservationist of the campaign and battlefield. A retired professor of History, Tom has been on and around Antietam for over 40 years. This is the only campaign he presents. He has written or co-authored several articles and edited the papers of Antietam historian Ezra Carmen in 3 volumes including: The Maryland Campaign 1862, Volume 2, Antietam.

David S. (Scott) Hartwig is a retired National Park Service historian who was the lead historian for Gettysburg National Military Park for over 30 years. In that time his other passion was the 1862 Maryland Campaign and he has appeared in the official park video with Dr. Clemens parsing the campaign. Scott published the first volume of a massive two volume study of the 1962 Maryland Campaign To Antietam Creek was published in 2012 and it weighs in at 808 pages. The second volume has been completed and is in the publication stage expected for release in Spring of 2023.

The servicing airports are Baltimore (BWI) and Washington Dulles (IAD). Hagerstown, Martinsburg and Harrisburg PA may all have limited service but how you get to Hagerstown from the airport without a rental car will be a challenge. I would check ground transportation options for each airport you may fly into. The hotel is just off I-70.

To register by mail or fax, download this printable registration form: The Battle of Sharpsburg