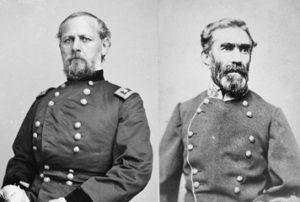 He disappeared—first he was at Tupelo and now he was in Chattanooga. Braxton Bragg’s first campaign as commander had started out well. Now encouraged by Kirby Smith and egged on by Kentucky Confederates, who believed the state to be an occupied Confederate sister, Bragg was ready to cooperate with Smith and liberate Kentucky while installing its Confederate governor.

Army of the Ohio Commander, Don Carlos Buell had been slogging across northern Alabama towards Chattanooga when Bragg’s and Smith’s aggressive actions caused him to turn north and race towards the Federal supply depot at Louisville. In the east, Robert E. Lee had moved into Maryland and had his eyes on Pennsylvania—the Confederates were on the march. We will follow the key elements of Bragg’s 1862 Kentucky Campaign and chronicle the first major stumble in a 14 month fall from grace that would find Bragg out of a job by the end of 1862.

Join us as western historian, Darryl Smith follows his successful 2021 BGES debut with a study of this frequently overlooked western campaign. A jovial and well read tour leader, Smith brings an enthusiastic and gregarious interface to his cohort. He is also a foodie and knows the best and most special places to eat providing for an even greater bonding experience. Late September is a great time to travel—of course our outcome will be a lot more pleasant than Bragg’s 160 years ago.

6 PM Gather at the Fairfield Inn and Suites hotel in Berea, Kentucky (Just east of Lexington) where Darryl will set up the scene in Kentucky that led to Kirby Smith’s invite to Bragg to cooperate in liberating Kentucky. We will break in time for you to have dinner on your own.

Depart the hotel at 8:15 AM: The Kentucky campaign started dramatically with the rout of new Union recruits at Richmond Kentucky. The one sided battle which took place as Lee was disposing of General John Pope at Manassas on August 30th—a very good day for Confederate arms. That fight permitted the Confederates to seize Frankfort, the capital of the state of Kentucky. Our first stop will be at the Visitors Center where an animated map will allow us to overview the events before going out and walking the key spots in the fight to include the hospital area at Mount Zion Church. The battle unfolds in three phases and we will complete the first two before lunch. We will complete the third phase at the Richmond Cemetery before returning to Berea. Lunch is included but dinner is on your own.

8:15 AM: Following Smith’s victory at Richmond, Bragg’s army moved into the innards of the state driving on to Mundfordsville. Here were fought two engagements during the war. The battle of Rowlett’s Station took place in December 1861 and since no one ever visits it (also known as the battle of Green River), we will. For some 130 men it was the most memorable event of their lives.

After the 1861 fight at Green River we will picot to the 1862 Kentucky Campaign. Meet John Wilder, a man and name welll known by students of the western campaigns. His determined defense of the railroad and Green River crossing provided General Buell with additional time to position his army to defend Kentucky. It will strongly influence the course of events.

Following lunch (included), we will drive to Perryville and survey the Peters Hill area where the fighting would start early on October 8th. We will return to the hotel by 5:30 where you can have dinner on your own.

8:15 AM: Today is the highlight of the tour—a full day walking the battlefield of Perryville. The battle is complex and not easily understood unless you walk it and this will involve a walk of several miles along the rolling terrain. There are spots in which the tour road intersects the battle flow and you will be supported as we are able to do so but this is an immersion with the soldiers who fought there. I can guarantee you will have a good deal more water and refreshments than the soldiers did. The two armies clashed there along Doctor’s Creek looking for water in the drought plagued region.

In the morning, the primary emphasis will be Cheatham’s Confederate Division against the raw troops on the Union left. After a local lunch, we will then cover the assaults along the Union right. We will close the day speaking about the impact on both Bragg’s and Buell’s commands.

This battlefield is a major engagement and it is nearly pristine—looking very much as it did at the time of the October 1862 battle.

8:30 AM depart the hotel for our morning visit to the new Camp Nelson National Monument. Long known as a camp of instruction this area became a training area for USCTs being organized to fight for their freedom. The National Cemetery, as is all such places, is a quiet place of honor for the defenders of the nation. We will return to the hotel and release by noon so you may get on the road to return home, time well spent.

Darryl Smith is a military history enthusiast who founded Walking with History LLC. He has served a number of regional leadership functions in various historical organizations including the Cincinnati Civil War Round Table, the Cynthiana Battlefields Foundation and a new organization being formed to help save the Augusta battlefield sites. Darryl lives in Cincinnati and is driven to teach history by walking it. This BGES member is a well known and popular tour leader in the Cincinnati area.

We have set aside a block of rooms at the Fairfield Inn and Suites, 227 Paintlick Road in Berea, Kentucky, 40403. The rate is $99 per night plus tax ($108 total). The cut off date for the block is September 7th. Call 859-985-8191 and ask for the Blue and Gray Education block arriving September 28th. After the cut off day the hotel reserves the right to honor the block rate or charge a different rate for late reservations. You are not required to stay at the HQ hotel.

The servicing airport is Lexington (LEX). Louisville (SDF) and Cincinnati (CVG) are close enough to be alternatives. The hotel is 30 miles from the Lexington Airport and you will likely need to set up a taxi, Uber, Lyft or rental car if you do not drive in.

To register by mail or fax, download this printable registration form: The 1862 Kentucky Campaign