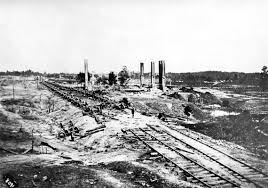 For many years the pivotal Atlanta Campaign has been presented in the shadow of the great eastern showdown between Grant and Lee, yet the capture of Atlanta is widely regarded as the final nail in the Confederacy’s coffin. It provided the national morale lift needed to propel Lincoln to be the first president to be reelected since Andrew Jackson. Several notable historians have undertaken campaign studies but none has shown more fresh scholarship than Dalton attorney Robert Jenkins.

The first two months of the campaign set the tone for the two months. The terrain had been daunting and now each river crossing was important and potentially disastrous. The challenges each commander had faced were real and thought-provoking demanding dramatic and decisive action to maintain the relative security of their forces. On the Confederate side an increasingly uncomfortable feeling had developed that Johnston would indeed not fight for Atlanta. He was on a very short string.

We will meet at the headquarters hotel at 6 PM to meet and greet your fellow students. Bob will follow with an opening discussion reviewing the Georgia Campaign to date, the strategies of each side, the significance of the campaign and the challenges faced by army commanders William Sherman and Joe Johnson. A looming storm on the horizon, portended the removal of Johnston and his replacement by the young eastern Lieutenant General John Bell Hood. We will break so you can get your dinner.

We will start this morning at 0815 heading to a commanding vista with Kennesaw in one window and Atlanta in the other. This was the vista that Sherman sought to reach since his start nearly two months ago. This morning we will treat with fighting at Smyrna and Ruff’s Mill before heading to the Ruff House and Farm which was captured by Union forces in 1864 and used as a hospital and staging area for wounded evacuees. We will then tackle the Chattahoochee River Line and its fascinatingly engineered military Shoupades used to resist federal efforts to cross the river and threaten Atlanta. It is then time for lunch in Roswell.

Roswell was an important manufacturing facility primarily manned and operated by women. They would be flushed from the city and evacuated north as far as Louisville, Kentucky. As the Federals enjoyed a wide manpower advantage they would be able to cross the Chattahoochee as will we en route to Nancy Creek which fed Moore’s Mill. We will then discuss the battle of Moore’s Mill which was little more than a tussle for control of a crossing point of Peachtree Creek. The Federals were successful thus opening the way for elements of the Federal 14th Corps to cross the Creek and join in the larger battle to come. We will then close the day near where Hood assumes command of the Confederate Army. Lunch included but dinner is on your own.

Very busy day today leaving the hotel at 8:15 AM, we are headed to the most detailed tour of the Battle of Peachtree Creek we will have done. Bob wrote the book on it. I will grant that the city of Atlanta has eaten up most of the view sheds but there are some clear and comprehensive stops that if you use the good maps you will receive your mind’s eye may be able to go back 158 years.

Our morning includes 15 interpretative stops starting at the Bobby Jones Golf Club with the Federal Crossings of Peachtree Creek. We will set William Hardee’s corps in its initial position and follow the shift in his line. As we continue on our look at part of the Confederates’ outer line of defense we will ask where was Bate’s Division? We will answer that at the Ansley Golf Club near Clear Creek. There was plenty of wooded area in 1864 and we will go to a spot known as the 100 acre woods off the Old Montgomery Ferry Road. Hood’s aggressiveness shows and our next stop examines Walker’s Division attack as part of Hardee’s Corps. There are familiar names such as Peachtree Street and we will bring you back to their importance during the 1864 battle. Indeed Captain WF Goodspeed’s 1st Ohio Battery commands the road with his artillery. As the Federals absorb more assaults, we will examine States Rights Gist’s attack and Maney’s attack as well (in Ardmore Park). After we break for lunch we will walk it off.

Plan to walk about 3 hours out of the remaining four in the tour. We will start at Tanyard Park where Loring’s Division composed of Featherston and Scott’s Brigades launch furious attacks and Featherston actually achieves a breakthrough in the Federal line—the Federals respond rapidly across the Bobby Jones Golf Club and the counter-attacks produce fierce hand to hand fighting. The back and forth of the remainder of the battle is best seen as we walk those give and take moments. Hardee has generally failed in his efforts but Stewart had some success on the Federal right. With some 15 interpretative stops you will be as weary as the soldiers who fought that hard battle on July 20th. The ink is hardly dry on the orders assigning Hood Command and he has given Davis a bloody hard fight in defense of Atlanta. Hood had hoped to hit the Federals hard as they crossed the creek. Because the Confederates failed to dislodge the Federals from the high ground the battle is widely regarded as a Federal Victory, but Hood had served notice that he would fight hard for Atlanta. But was the city an albatross on his back? You can find that out in part 6 in November. Lunch is included and dinner is on your own. We will return to the hotel by 5 PM and you will be good to go.

Bob Jenkins is a practicing attorney in Dalton, Georgia. An active preservationist, Bob has played a significant role in expanding the story of the start of the 1864 Atlanta Campaign. He has completed two outstanding books on the campaign: The first being The Battle of Peach Tree Creek: Hood’s First Sortie, July 20, 1864 (2014) and To the Gates of Atlanta: From Kennesaw Mountain to Peach Tree Creek, 1-19 July 1864 (2015). Bob is an animated and detailed interpreter and you will be regaled with new and thought-provoking information and stunning vistas.

The headquarters hotel for this program is Fairfield Inn and Suites, Atlanta Marietta, 2500 Delk Road SE, Marietta, GA 30067. The rate is $119 per night plus tax. The block rate will be held until February 25th. You may use the following hotlink to make your reservations directly online. You may also call the hotel directly at 678-737-3715, ask for the Blue and Gray Education Society rate.

The servicing airport is Atlanta (ATL). For people driving in, the hotel will be convenient to Interstate 75.

You will be provided with maps upon arrival. The following books are suggested to enhance your readiness for the program. These books are available online. If you register with AmazonSmile, a portion of any books you purchase for this or other purchases will be sent to BGES as a charitable contribution. BGES’s EIN is 54-1720582

Registration includes two lunches, all paid admissions, maps, the academic program, support of a professional historian, tour director and transportation by passenger bus or van. We will also provide snacks and bottled water.

To register by mail or fax, download this printable registration form: Battle of Peachtree Creek