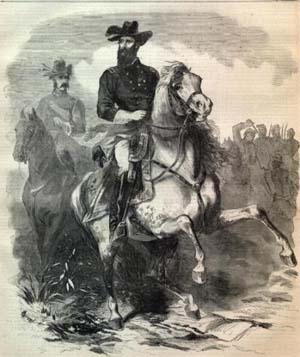 The more you look at U.S. Grant’s Vicksburg Campaign, the more you see how dynamic and innovative it was. A seemingly independent cavalry action through Mississippi in late April and early May, and another from Eastport, Mississippi, toward Georgia at the same time, now are clearly associated with Grant’s risky and essential Louisiana march along the Mississippi River. The former, conducted by Col. Ben Grierson, a peacetime dance instructor, caught the eye of the famous Western actor, John Wayne, who, working with William Holden, created a popular romanticized movie The Horse Soldiers. The movie bears little resemblance to the historical event—with the notable exception of Newton Station. However, we now know just how important this raid was—so much so that Grant specifically designated Grierson for the command. We also know that it was extremely successful in distracting the Confederates from Grant’s march, and that the Georgia ride through Alabama kept the feared Confederate cavalryman, Nathan Bedford Forrest, away from the Grierson Raid as he pursued Colonel Streight’s raid.

The actual route of Grierson’s raid and, indeed, the essential components of it, were hardly known until Grierson’s diary and memoir were discovered and published. Now historian Tim Smith has extrapolated all these new details and, in his book, The Real Horse Soldiers, has developed the closest approximation of the route known to date. Indeed, the known points suggest this will be the most accurate mapping of the operation ever done. Tim has published the book, and this is his very first public tour of the route he has discovered! You do not want to miss it.

Read this book review on the BGES Blog of The Real Horse Soldiers; and this “Tour Talk” interview with Timothy Smith.

6 p.m. Gather at the Courtyard by Marriott Pearl (near the airport), where Tim will introduce you to Colonel Grierson, the concept, and his thinking and flexibility in planning. He is an interesting character whose thinking is both strategic and advanced tactical. He was a man who displayed characteristics of leadership that stayed with General Grant and which Grant considered essential if his own operation was to be conducted with a minimum of Confederate attention. Let’s then go have dinner at the Cock of the Walk.

7:30 a.m.: We need to leave early, so have your bags on board by 7:20. We will leave at 7:30 for our 3.5-hour ride to LaGrange, Tennessee. We will use the time, once all have awakened, to share either the movie The Horse Soldiers with you, or Tim will give you a bonus presentation on Grant’s Mississippi Central Operation from late 1862. From LaGrange, Tim will lay out the first five days of the raid, April 17–21. You will see how Grierson dove into Mississippi and beat off the only Confederate force that might disrupt his operations. By splitting his force in a diversion, the Rebels took the bait, and when Grierson went south, the Rebels were headed northeast.

We will move with the main body through Ripley, New Albany, Pontotoc, and then Starkville, where we will overnight. While en route, we will stop at several plantations mentioned by name by Grierson—including the Ellis, Sloan, Daggett, and Kilgore Plantations. We will also see the Palo Alto battlefield where Grierson’s diversionary force fought one of the few shooting engagements of the operation.

We will overnight at Holiday Inn Express Starkville. Your lunch and hotel are included. Breakfast and dinner are on your own.

8:15 a.m.: Today our mission is to cover days 6 to 11 (April 22–27) of the raid. Grierson is pushing southward through Louisville, Philadelphia, and Newton Station. Here at Newton Station fiction meets reality as Wayne attacks; so, too, does Grierson. This operation is significant in that it catalyzes a frenzied Confederate response. As with so many other cavalry raids, Grierson does not elect to turn back toward the north where he has already stirred up a response. He continues south. We will continue through Garlandville, Raleigh, and Westville.

Dramatically, Grierson finds himself nearly trapped by the challenge of crossing the Pearl River. He successfully crosses and then makes another hit on the Confederate railroad system at Hazelhurst. He is trying to cooperate with Grant, who is readying his effort to cross the Mississippi. Trouble at Grand Gulf extends Grant’s operation, and he and Grierson miss connections.

The most impressive portion of this modern-day sleuthing of the route is the reality of the plantations mentioned in Grierson’s notes—you will see Estes, Bender, Nichols, McAdory, Williams, and Thompson’s Plantations. We also have permission to access some private property before heading to overnight at Holiday Inn Express in Brookhaven.

The hotel, breakfast, lunch, and dinner are included.

8:15 a.m.: We will finish our program in our tireless horseless carriage—our forage needs and the recruitment of our worn flesh from miles of road travel cannot compare to the condition of Grierson’s men and horses as we move into the third week of the raid. Today we finish following days 12 to 16—April 28–May 2—the day after Grant fights at Port Gibson. We will follow the destructive path of Grierson’s men along the railroad at Brookhaven, Bogue Chitto, and Summit. We will also examine the light military engagements at Union Church and Wall’s Bridge where Confederates successfully closed on the blue column. We will visit other plantation sites owned by Messrs. Gill and Spurlock and bridge crossing sites where Grierson shook his pursuers and made for Baton Rouge and his encampment (which was photographed) at Magnolia Grove. The raid is over.

Tim Smith is a well-established star in the Civil War community. This is his first tour with the BGES. However, his robust scholarship precedes him. This tour is based upon his book The Real Horse Soldiers. His other publications are too numerous to mention—all focus on war in the Mississippi Valley, with his most recent scholarship returning to the Vicksburg Campaign. Altogether, Tim has published more than 20 books, and he is not slowing now. He teaches at the University of Tennessee at Martin.

Your registration fee includes three hotel nights starting on August 11 in Pearl (a Jackson suburb). The headquarters hotel is the Courtyard by Marriott Pearl, 415 Riverwind Dr., Pearl, MS 39208; 601-914-4888. The other hotels are the Holiday Inn Express, Starkville, MS (August 12); and Holiday Inn Express in Brookhaven (August 13).

The final night hotel on August 14 is not included in your fee, and should you wish to make a reservation there in Pearl at the Courtyard for $124 plus tax, the number is 601-914-4888; ask for the Blue and Gray Group. There is also a slightly cheaper alternative for your exit night at the Fairfield Inn Pearl, at $104 plus tax. Again, ask for the Blue and Gray Group; that number is 601-936-3434.

The servicing airport is Jackson (JAN), which is primarily serviced by Southwest and Delta, although you may also connect on American and United. I-20 and I-55 bisect the area. Jackson is also served by Amtrak.

You will be provided with a reading book and maps upon arrival. The following books are suggested to enhance your readiness for the program. Amazon.com has a program to support non-profits IF YOU SIGN UP to support Blue and Gray Education Society (EIN 54-1720582) at AmazonSmile. When you sign up there rather than the normal Amazon site, one-half of one percent of your purchase price will be provided to BGES as a donation from Amazon. This will apply not only on this purchase but others you may make at other times. Thank you.

Registration includes three lunches and one dinner, a reading book with maps, the academic program, support of a professional historian, tour director, and transportation. We will also provide snacks and cold bottled water.